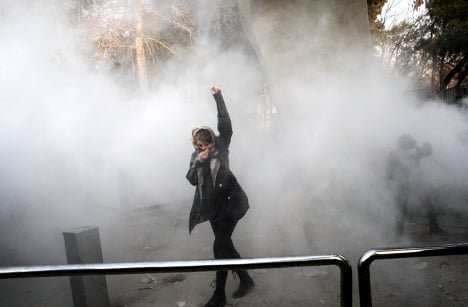 An Iranian woman raises her fist amid the smoke of tear gas at the University of Tehran during a protest on Saturday. Photo: ATR/AFP

Some 40 people demonstrated near the Iranian embassy in Paris to call for an end to Tehran's “interference” in Syria and Lebanon, which Afchine Alavi, from the National Council of Iranian Resistance (CNRI), told AFP mirrored demands being made within Iran.

In Berlin, around 100 regime opponents gathered near the Iranian embassy to demand the immediate release of people arrested during three days of protests.

Around 50 people had rallied at the same venue on Friday.

The rallies began in Iran's second city of Mashhad on Thursday as an attack on high living costs but quickly turned against the Islamic regime as a whole.

Alavi told AFP the demonstrations were connecting with “an ever wider base of Iranian society… from the middle class but also vast numbers of people who are the army of unemployed and hungry who have suffered economically from the consequences of corruption”.

Although the demonstrations inside Iran remain on a small scale they are nonetheless the first of note since Tehran quelled a much wider protest movement in 2009.

The government has warned against “illegal gatherings” while there have also been several counter-demonstrations over the past three days.

PARTNER CONTENT
93 percent of this MBA’s graduates have doubled their salary
Url copied to clipboard!