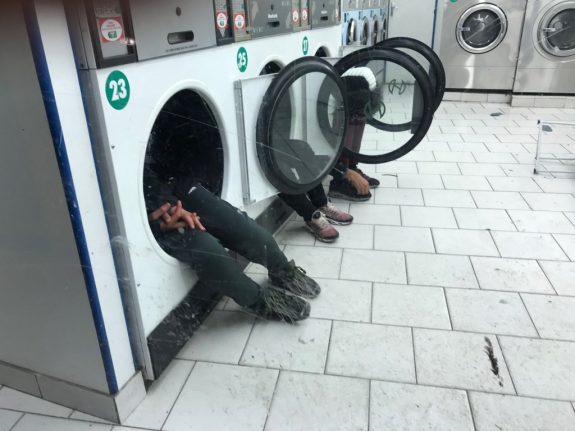 The children, who are from Morocco and who have lived rough on the streets since they first appeared about a year ago, roll up in a ball in the dryers when they seek shelter from the bitter winter cold.

Most of them are believed to be addicted to drugs and live from stealing when they venture out of the park in the 18th arrondissement where they have set up a sort of base.

City authorities have sought to house and care for the street kids, who are believed to number around eighty, but they have reportedly refused all help.

The photo of the three teeenagers in the dryers was taken a few days before Christmas by a Parisian woman who spotted the boys in a laundromat on the Rue de la Goutte d’Or.

“It really touched me,” the woman, named only as Christine S., told Le Parisien newspaper.

“I found it shocking to see theses young migrants, of whom at least one was sleeping, in this situation. When K showed the photo to my friends they advised me to put it on social media because it is so striking,” she said.

She posted it on Twitter and Instagram and quickly got hundreds of reactions, many expressing concern and shock.

But the owner of the launderette was less sympathetic.

“They sniff glue and assault our employees,” she told Le Parisien. “Some (customers) are afraid to come now, and the turnover of the launderette has been divided by four.”