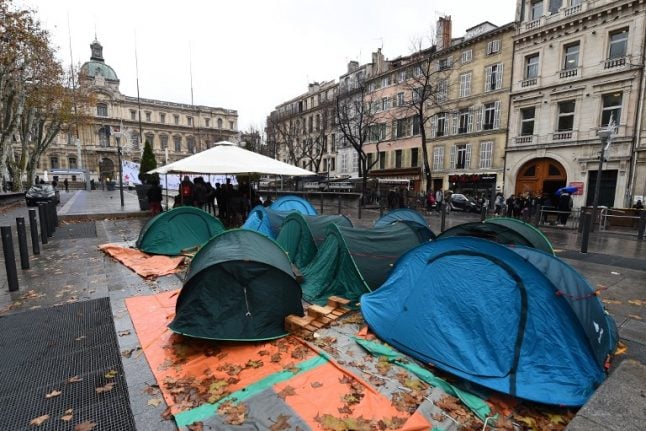 Migrants camp outside a government building in Marseille. Photo: AFP

Police believe the man in his twenties fell from a shack he had been staying in on some sort of ledge above the road near the town of Roquebrune-Cap-Martin.

He was barefoot when he was found and was in a sleeping bag on the side of the road. An autopsy is due to be carried out to determine the cause of death.

Police found a diary in which he recounted his daily life and the lengthy trip that had taken him from his home country to Europe, written in English, among his affairs, local media reported.

The death came less than a week after a 15-year-old Afghan migrant died after apparently being hit by a car on a road near Calais in the north of France.

Another migrant, an Iraqi national, is in a critical state after he was hit by a car on a motorway on Christmas Eve near the port of Dunkirk.

At least 15 migrants have died in southern France since September 2015, according to a count kept by AFP news agency.

The latest victim there likely came via the Italian border town of Ventimiglia, which has become a launching pad for migrants who make it to Italy and seek to head north into France.

Increased border patrols have made it much harder for them to do so, so many are now braving the snow-clad Alps further north in efforts to evade immigration police and reach France from Italy.

They often take treacherous high-altitude passes that locals warn will lead to deaths. A rally to warn of the dangers to migrants in crossing passes in the Alps during the winter. Photo: AFP

The migrants have typically been refused asylum in Italy, and want to try their luck in France — although under the so-called Dublin Regulation, France has the right to send them back across the border.

Until recently it was relatively easy to cross into France thanks to the unmanned border between the two countries.

But monitoring has tightened as the volume of arrivals has grown in recent years.

READ ALSO: Migrants are risking death to cross the Italian Alps into France

And French President Emmanuel Macron has vowed that his government will be “inflexible” in its policy of expelling economic migrants who have no right to asylum.

Macron's centrist government has promised to open up new legal avenues for refugees to travel to France, while cracking down on others who are in France to avoid poverty back home, rather than war or persecution.

“We can't take all of the world's misery,” Macron has said.