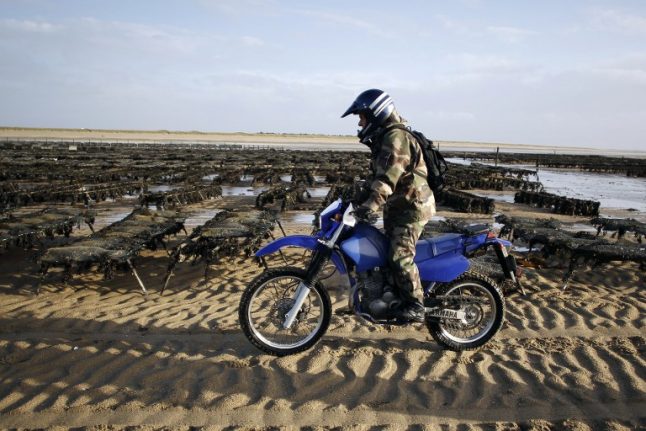 A gendarme patrols on a motorbike to protect oyster beds from thieves. Photo: AFP

The theft of 800 kilos of the luxury molluscs took place at some point over the last week in the region that includes the famed Marennes-Oléron oyster beds.

The oyster beds’ owner plans to press charges against unknown persons for the crime which was carried out despite close surveillance of the sea farms by police and private security companies, according to reports.

Oyster thefts are common at this time of year as sales take off for the delicacy that is a staple for Christmas and New Year’s dinners in French homes and restaurants.

Around eight tonnes of oysters have been stolen since the start of 2017 in the Charente-Maritime region, which takes in the Ile de Ré and the Marennes-Oléron beds and supplies 10,000 tonnes a year, a third of the total French production, according to police figures.

The local producers’ organisation says the figure is even higher, possibly at 13 tonnes, because producers often do not bother to inform police about thefts of small quantities.

In October in the Arcachon basin further south along the Atlantic coast, seven tonnes were stolen in a single robbery. Locals can go to the vending machine and order their oysters, in batches of twelve, at any time of the day or night.

The stock is renewed every day and the oysters sold closed to avoid any health risk. Prices are the same as in the couple's adjoining shop, starting at €6.90 for a dozen.