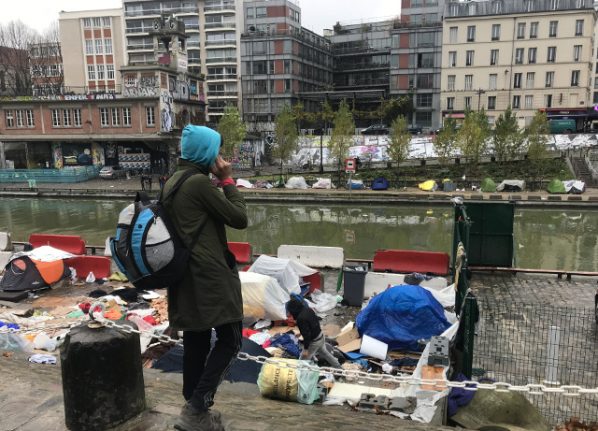 “Teachers in school taught us about France and what a wonderful place it was,” said Khater, who said he was 15 years old, as he stood by the dozens of tents strung along the banks of the Canal Saint-Martin that now serve as home for hundreds of migrants.

“I didn’t think it would be like this,” he said, surveying the squalid scene along the canal, whose banks in summer host hundreds of trendy youngsters drinking beer or wine late into the night.
Khater, like the other migrants mostly from Afghanistan that The Local spoke to, said he had been given an appointment in a government office to apply for asylum in several weeks’ time. Migrants' tents on the banks of the Canal Saint-Martin
That means he will be on the streets until at least the date of the appointment, and possibly even after it.
They will spend Christmas Day like they spend most other days, hoping it won’t rain, trying to keep warm and dry, and waiting for local charities to provide a hot meal.
They care little for Christmas, as most of the migrants there are Muslims.
But the sight of hundreds of migrants living rough along the canal, or further north at Porte de la Chapelle where a migrant processing centre is based, will do little to boost Christmas cheer in the French capital.
The numbers living on the streets in Paris has started to grow again.
READ ALSO: The tents are scattered along the canal from near Jaurès metro station
When the mini tent cities start to grow big, police move in to demolish them, with city officials following close behind to offer temporary accommodation.
But many migrants quickly return to the streets, and along with new arrivals the shantytowns build up again.
The peak was in autumn 2016, when several thousand migrants from war-torn or poverty stricken countries lived on the streets of Paris.
That surge prompted city authorities to open a 400-bed centre at Porte de la Chapelle, where single men can get temporary refuge for up to 10 days, with families, women and unaccompanied minors being redirected to other government-sponsored housing.
But the system still leaves hundreds and at times thousands on the streets.
Police are under orders to stop tent cities forming, and are accused by migrants and charity workers of confiscating or destroying tents and sleeping bags.
Critics ask why France appears to be failing refugees that end up here when Germany has been able to handle more than a million migrants since 2015, with few if any of them having to live in the squalor seen on Paris streets or at the notorious Calais “Jungle” that was finally shut down just over a year ago. Queue at a government office near the canal where migrants get initial asylum interviews. All photos by Rory Mulholland.
Last year, 85,700 applied for asylum in France.
In June, the newly-elected French President Emmanuel Macron said: “We have to welcome refugees, it's our duty and our honour.”
But since then his opponents have repeatedly highlighted what they say is the glaring discrepancy between what Macron has said and what he is doing on the issue.
This week, his government’s plans to expel more failed asylum seekers, and draw up a tough new bill on immigration, prompted fury among rights groups.
Back on the Canal Saint-Martin, such matters are of no immediate concern for Jahan and the fellow Afghan he shares his two-man tent with. Their priority is to keep dry over the Christmas holiday period, which is forecast to be mild but rainy.
“Look,” the 23-year-old said, as the pair draped a survival blanket over their tent as an extra layer to keep the rain out and the heat in, “everything is soaking – my shoes, my jeans, my jacket.”
by Rory Mulholland