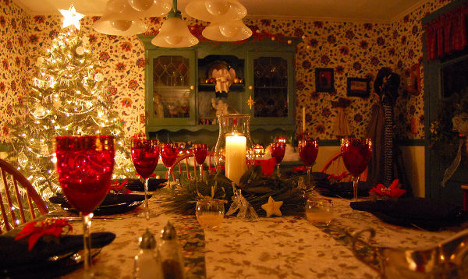 Photo: Josh McGinn/Flickr
Arrive 15 minutes late, but not later
Arrive 15 minutes late, says French blogger and Youtube sensation Géraldine Lepère. While in many countries this may be considered rude, in France this is a golden rule. “It’s an unspoken agreement between the host and the guest because the host might be a little late preparing everything and the guest won’t want to embarrass the host by arriving early,” says Lepère. But be warned: this rule only applies to dinner parties and not for dinners at restaurants. Present or no present?
This is often a disputed point. But French expert on good manners Jérémy Côme says it isn't the done thing to bring a gift when you are invited to dine in someone's home in France and there are several reasons for this he explains.
“The first reason is you put the host in a delicate situation,” he told BFMTV. “Suppose you bring a gift from a big name brand, the person may not have the means to return the favour.”
And the same goes for bringing a bottle of wine. Côme says the hosts will have prepared dinner and the wine to go with it. So you could create an awkward situation if you turn up with a bottle of Bordeaux and you are served Boeuf Bourguignon, which would normally be washed down with a fine Burgundy wine.
But most importantly of all, don't bring Champagne, says Côme.
“If your hosts have not planned for it, it can put them in an embarrassing situation,” he added.
Or even worse Prosecco. It's not from France you see! (A1404/ FLickr)
Santé!
Remember the toast is very important in France. Don't just go “Cheers Everyone”. You'll need to chink glasses with each person and remember to look them in the eye. Never cross your arms over other people who are toasting too. “Santé” or even better “A votre santé” (to your health) is the right thing to say. Photo: Zamurovic/Depositphotos
Don't spread your foie gras
“Many French people are proud of foie gras; when it is served cooked and chilled, take a generous slice, set it on the toast that will be served with it, and enjoy. Don't treat it like a mousse, and try to spread it,” Herrmann Loomis says. Photo: cyclonebill/Wikimedia
“This controversial delicacy and like all fine foods in France you have to treat it with the respect the locals think it deserves. And a big part of this is resisting any urge to spread it on bread before you eat it. It's not a Brussels paté, you'll be told.”
“And while we're at it, don't talk about animal cruelty when there is foie gras in the neighborhood. It's a traditional dish; the French copied it from the Egyptians a gazillion years ago, so if you really have a problem with it, take it to Egypt.”
Conversation – nothing too controversial
Brush up on French current affairs – “Conversation is a huge part of a dinner, especially the news,” says Geraldine Lepère. But the general rule is no religion and no politics unless you are sure everyone is on the same side and avoid talking about money.
Don't cut the cake
If you're hosting a dinner this Christmas in France, remember not to cut the cake.
It's one of the dishes that guests can refuse, says manners expert Côme.
“Once a person has served themselves, the cake can be passed around but we do not impose a share of the cake on a guest,” he added.
Basic table manners
These are very important in France. Keep your hands on the table. Don't talk with your mouthful. Don't start munching until your host has. Keep your napkin on your lap. All the basics.
Don't ask for more food
Sure, the French often serve teeny tiny portions, but asking for more would “clearly be a faux pas”, says Paris-based cook book author and teacher of French cooking classes, Susan Herrmann Loomis.
“It would be an insult to the chef or cook to ask for more. If they offer more, of course, then you're safe.”
And if you're still hungry just remember that there is still cheese and dessert to come.
Cut into cheese correctly (or let someone else do it)
There are so many faux pas with cutting cheese that you're bound to go wrong from the beginning.
For a start the cheese comes after the salad, before the dessert. And leave the grapes and crackers in the cupboard.
But most importantly, you have to cut it the right way. Cut the cheese in the direction it's already been cut, never cut off the point and don't leave the cheese board looking a warzone, she adds. CLICK on link below to know more about Gallic Cheese rules.
READ ALSO: Best Briehaviour – A guide to French cheese etiquette Photo: Fedac/Flickr
Don't put your bread on the plate
While it may be tempting to put your bread on your dinner plate like you do back home, resist the urge in France, says Herrmann Loomis.
“In France the bread goes on the table. They think it's odd if you try to balance a piece on your plate. It's a custom.”
Don't put butter on the bread
“The French just don't do it except at breakfast, and then they slather it on,” says Herrmann Loomis.
“But the French don't serve butter with meals so don't expect any.” And don't put any on your croissant either, it's made of butter. (Star5112/Flickr)
Don't drink anything but wine or water with dinner
“Americans often drink coffee with their meals and I have seen people ask for it here,” Herrmann Loomis says.
But this isn't the French way to do it. Here it's wine or water. Also on the banned list of drinks is coke (maybe for kids but it's not typical). Beer is OK depending on the meal – it goes great with choucroute, for instance, or mussels.
But we wouldn't recommend it for a Christmas meal.
Don't eat with your hands
It might sound like obvious advice, but you'd be surprised at what some people think is good dinner table etiquette.
“Don't take a chicken leg and pick it up,” Herrmann Loomis says. “Use the knife and fork.”
Leave the ketchup alone
Basically no one in their right mind should ask for ketchup at a French dinner table unless you're having French fries, but it still happens.
Your addiction to the red sauce can cause all sorts of problems in France, especially if you want it on your omelette – but you're just going to have to quit it. The same goes for BBQ sauce, unless you're at an American style joint, and don't expect any “French dressing” on your salad. Where do you think you are?

But most importantly, you have to cut it the right way. Cut the cheese in the direction it's already been cut, never cut off the point and don't leave the cheese board looking a warzone, she adds.

As you already know, saying hello and goodbye is an important ritual in France, given all the cheek kissing that goes on. When it comes to saying goodbye, you are advised to take your time. That doesn't mean keep kissing everyone. It just means don't just get up and leave. Bear in mind the goodbyes could take a good half an hour.