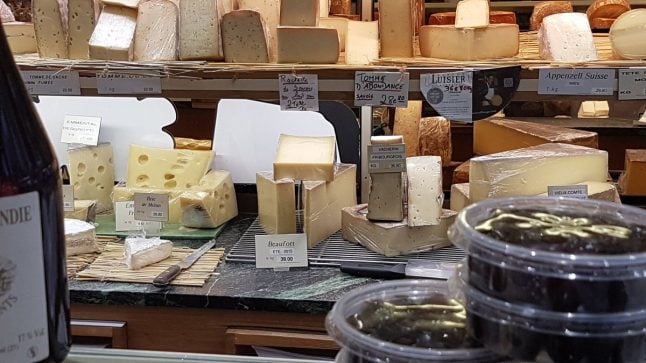 As a veteran of fondues I know what I want in there: Comté, Beaufort and Appenzel. Forget Emmental, it's not strong enough.

But my usual Paris cheese monger put a spanner in the works this week.

When I asked him for some Beaufort he just looked at me and shook his head. The conversation went roughly like this.

Monsieur fromage: “The Beaufort is just too good.”

Monsieur: “No it's too good for a fondue. It's so tasty. It would pain me (faire mal au coeur) to see it melted.”

Monsieur: “No, No. I'll give you some Abondance. It's a similar cheese and cheaper.”

Me: Errrr. OK, but can I have some Beaufort too.”

Monsieur: “Are you going to put it in the fondue?

Monsieur: “Sorry can't do it.”

Me: “Wait, you are meant to be a cheese eating surrender monger.”

Frenchman in Paris cheeseshop stubbornly refused to sell me Beaufort cheese for my fondue: Him: It's just too good for a fondue. Me: Great. 200g please. Him: Are you gonna put it in the fondue?. Me: errrr Oui. Him: Sorry. Cant do it. #OnlyinFrance #Customerisneverright pic.twitter.com/fTPn1oxDqx

OK that last bit was made up. But in my head I'm thinking “Cheeses Christ. Is he for real or is he totally Emmental. Does he not want my money?” Isn't the customer meant to always be right? What would have happened if I had insisted? Would he have thrown me out for his principles and told me to go and spend my €44.53 in another cheese shop? Could he report me to the prefecture and scupper my future attempts to get French nationality? I feared I would be banished to cheese hell (Holland) if I pushed it too far. I was left in shock but also awe of the man who protected the welfare of his cheese.

In the end we reached a kind of compromise. He gave me Abondance for my fondue and agreed to sell me 200g of his special Beaufort as long as I signed a “compromise de vente” (sales agreement) that it wouldn't be grated or melted and would only be used to be put on display on the mantelpiece.

Fonduegate part II: After 15 mins Paris cheesemonger allows me to buy Beaufort. But only separately. Then makes me sign contract (just promise) that it can't be grated or melted. Says it would make him sick if it ends up in fondue…#Respect pic.twitter.com/BmVJJipCXS

Well not quite, but almost.

He did also take the time to explain to me why a 2015 Beaufort is just too good for fondue. Good Beaufort's aged two years are becoming harder to find these days, apparently, because they are expensive to make and to store.

Producers are under pressure to make money and they know the name Beaufort will sell anyway, so they are not bothering to keep them and age them. The aging process can be risky and it can go wrong and lead to the cheese being ruined.

He invited me to pop to a supermarket and buy a 6-month-old Beaufort for a fondue, but not his 2015 vintage. The taste would be lost forever in that melting pot.

The story of fonduegate spilled over into Twitter where many sided with the shopkeeper and some even felt sympathy with my position.

You should listen to him! He is right. Fondue isn’t better with the oldest cheese you can get

For an aged beaufort he s right. A regular young Beaufort is great for fondue

Beaufort is actually the valley where the Fondue was invented. You were right, he was wrong.

Are you nuts?
Of course Beaufort is much too good for this use and will spoil other tastes. https://t.co/9wescBK5i1

Even France's Ambassador to Sweden got involved and as you'd expect he was very diplomatic.

I have sympathy for both protagonists. Pains me to admit as a diplomat but sometimes 2 legitimate positions just cannot be reconciled. https://t.co/kmzuoUNmlB

Anyway I might not have come away with the cheese I was after but I certainly learnt a thing or two.

The reaction of the French shopkeeper was not of course a total surprise. Most people who have lived in France will have a story of having been corrected or even told off by shopkeepers, waiters or chefs after trying to order something.

There are the chefs who refuse to do a steak well done. A waste of good meat, they say. There are wine sellers who refuse to sell you a bottle of Bordeaux if they find out you are cooking Boeuf Bourguignon and the clothes store staff who simply tell you: “Sorry you are just to big to fit in that size”.

I was once in a restaurant with an ex in Paris. We ordered a bottle of wine, started drinking, having a chat and then he decided to order a steak… well done. We were told in no uncertain terms to leave the restaurant and never darken its door again. I bloody love Paris 🙂

Once in Montreal, a café owner refused to give my husband a cup of hot chocolate along with a slice of quiche, because she said the taste of each would be ruined.

While everyone who has been to France has probably had the experience of a moody waiter or a shopkeeper who seems affronted you entered his/her store to spend money, they do have an unfair reputation of being impolite and snooty.

They generally know their stuff, especially when it comes to food and are a lot more passionate about what they are selling than we perhaps are used to in stores in “Anglo-Saxon” countries where might get the works in terms of politeness, but do we always get the expertise?

A real cheese retailer !!! He loves his products – he would not sell strawberries to pigs ?

I love when shopkeepers actually know their products and are passionate about them, though. There is value in it.

It totally makes sense. He refuses out of respect for the cheesemaker, whose intent was for someone to enjoy the nuances of this specific 2015 Beaufort, not so it gets melted with other cheeses, white wine and garlic. You wouldn’t make sangria with a rare Bordeaux, would you? ?

So respect to the Paris cheese monger. A man who puts fromage above fric. But this Beaufort better be bloody good, or it's going in the pot.