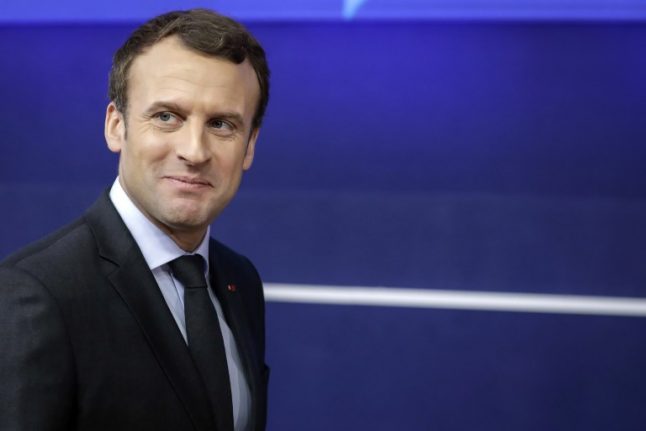 A few months ago, French President Emmanuel Macron looked to have lost his Midas touch. But as he turns 40 this week, he has rising poll numbers and a growing international reputation to celebrate.

Seven months into his presidency, the centrist has forced through a first wave of pro-business reforms with only mild resistance and has reversed what some feared might be a terminal slide in his popularity.

A survey out on Tuesday by the Odoxa polling company showed that 54 percent of French people had a positive view of him, up nine points in a month, while Prime Minister Edouard Philippe has an approval rating of 57 percent.

“Before they used to fall and then never come back, but he's rebounding,” Pascal Perrineau, a veteran political science professor at Sciences Po
university in Paris, told AFP.

In August and September, Macron was polling in the mid-30s, a record slump for a new president which seemed to show that grumpy French were already fed up with their new and inexperienced leader.

Many commentators viewed him as detached from the everyday concerns of average citizens, while others denounced his tax and economic plans as mainly benefiting the well-off. But the turnaround in his fortunes has led to a reappraisal of France's youngest-ever president, who will celebrate his 40th birthday on Thursday.

The reasons include his assured handling of the recent deaths of two major cultural figures, the writer Jean d'Ormesson and the singer Johnny Hallyday — a rock icon for whom hundreds of thousands turned out on the streets of Paris in tribute.

Macron also continues to benefit from the weakness of his political opponents and divisions among the country's once-mighty trade unions, which have shown plenty of bark but no bite over his first pro-market reforms.

Meanwhile, France is showing its strongest economic growth in years and the wider European area is pulling out of its stagnation since the 2008-09
financial crisis.

But analysts and observers see at least three other reasons for the Macron recovery which reveal more about the sort of president the French elected when they voted for the little-known former economy minister in May. First, he is seen as pushing through his domestic campaign pledges methodically, including the landmark changes to labour law in September and a shakeup of unemployment benefits and adult professional training next year.

“People recognise that he is someone who keeps his promises,” said Chloe Morin, an expert on public opinion at the left-leaning Jean-Jaures Foundation. “That's important.”

Second, he appears to have learned from some of his early missteps.

He started out promising to be what he termed a “Jupiter-like” president, fashioned on the Roman god of the sky, who would stay above the fray of daily politics and give few media interviews.

After criticism that he was aloof and copying the style of France's past monarchs, he has reversed course and is now the sort of ever-present leader the French have grown accustomed to.

“I listen to the various viewpoints, the opposition and the political debate,” he said in an interview with France 2 television broadcast on Sunday.

Third, Macron has seized an opportunity to shine on the international stage offered by the isolationism of the United States under Donald Trump and Britain's retreat after its Brexit vote. In the last few weeks, Macron played a leading role in resolving a political crisis in Lebanon, completed a major tour of west Africa and hosted 50 world leaders for a global climate change summit.

That has helped project an image of France as a global power again, something Macron sees as the country's destiny as a cradle of Western democracy and human rights.

“French people are starting to love France again,” Perrineau said. “That's something you see in all of the surveys… France is back at the forefront on the international and European stages.”

“When there are problems, they often come from him, his attitude or clumsy statements,” Morin said.

Macron, a former investment banker, has been repeatedly targeted by his opponents for being elitist and patronising towards France's working class.

He has called strikers “slackers” and has been dubbed “the president of the rich”, and his decision to hold a family birthday party in the grounds of a sprawling Loire chateau last weekend touched off criticism. Furthermore, his agenda for overhauling the European Union is stalled because of political deadlock in Germany, while his centrist Republic on the Move party and many of his government ministers are struggling to assert themselves.

A new round of domestic reforms, including sensitive changes to unemployment benefits, could see strikers back in the street early next year for another round of protests that his opponents will hope to capitalise on.