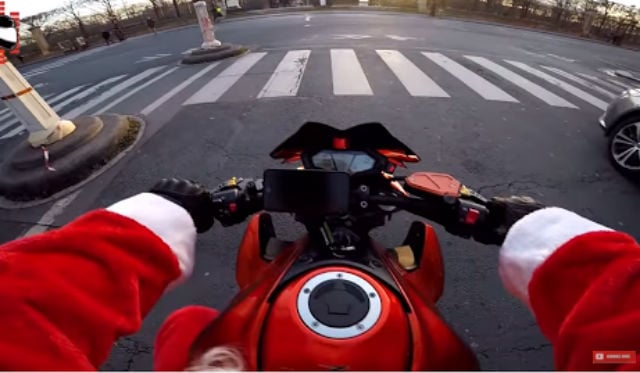 YouTuber Chris RS is used to going out and about in Paris on his red motorbike to make little films for his internet followers.

His latest movie involved dressing up as Santa Claus, complete with red bobble hat and white beard, to cruise around the French capital with a camera attached to his helmet, as usual. But he had not planned on getting involved in a dangerous road chase with a female driver who had just knocked over an elderly pedestrian after passing through a red light on Rue de Rivoli.

His video captures the moment the pedestrian, who was reportedly walking with a cane, is knocked down and Chris RS decides to give chase. He tries a number of times to persuade the driver to stop but she waits until he is off his bike before speeding off.

The chase only ends when the motorbike rider alerts two police officers near the Madeleine church. One of them eventually persuaded the woman to give up the chase, thanks no doubt to the fact he pointed a gun at her head and ordered her out of the car. The Youtuber then heads off to the police station to no doubt hand over his footage, which was posted online and has since had over 1.5 million hits.