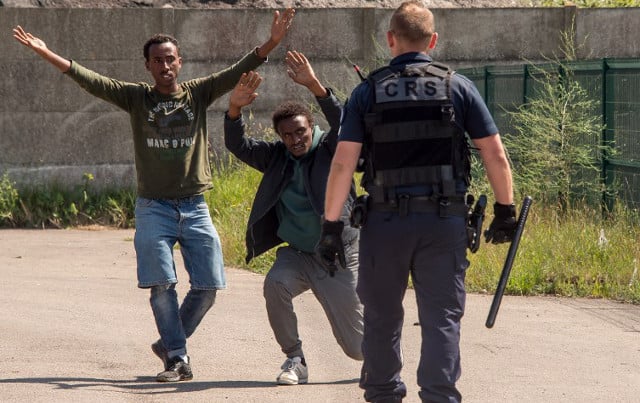 Photo: AFP
France's Interior Minister Gerard Collomb has been criticised for taking a hard line on asylum seekers, with rights groups saying his actions represent a worrying shift in policy from the French government as it prepares its controversial “asylum and immigration” bill.
Collomb has come under fire for sending circulars to immigration authorities urging them “to act quickly” to expel migrants in an “irregular situation” and to create a census of the people living in France's emergency shelters.
Another recent circular urged checks to be carried on migrants who were being housed in emergency lodgings to evaluate their right to stay in France. Rights groups believe these checks are just a way of speeding up the process of kicking out asylum seekers.
“No previous government has gone as far as this, not even under Nicolas Sarkozy,” said Clemence Richard from La Cimade, an association that supports migrants.
These instructions have come to light as the government prepares its bill on “asylum and immigration” which, although not yet published, has caused a backlash among rights groups in France.
According to reports; one of the aims of the bill is to reduce the average processing time of applications from fourteen months to six months.
But one of the major points of contention is the plan to extend the maximum period of detention for foreigners who have been expelled from 45 to 90 days. This, the government believes, will improve the effectiveness of evictions by giving the authorities more time.
Another controversial measure is the idea of “safe third countries”. The government wants to be able to send migrants back to countries they have already passed through on their way to France.
The moves have shocked the left wing press who have been quick to point out the discrepancy between what Macron has said in the past and what he is doing on the issue.
In June, the French president told the Council of Europe: “We have to welcome refugees, it's our duty and our honor.”
Macron however has made it clear on various occasion that those who don't have the right to stay in France cannot.
He provoked anger in November when he was approached by an undocumented Moroccan woman.
“If you are not in danger in your country then you must return home,” he said.
READ ALSO: The tents of undocumented migrants where they have been camping outside the prefecture of the Bouches-du-Rhone department in Marseille. Photo: AFP

Interior Minister Collomb defended what he calls a “reasonable line” on the matter in an interview with RTL on Monday.
“If we welcomed everyone, we could not welcome them in good conditions,” he said. “Today in France, we have 95,000 requests a year, that means the equivalent of a big city every year.”
The latest figures from the Ministry of the Interior on asylum applications show that 85,700 were issued in 2016.
“Today, we do not know who is in these emergency shelters,” Collomb told RTL. “It is estimated that about one third of the people are refugees who could be entitled to housing and have the right to a normal life, one third are asylum seekers who should be able to leave France, and another third are people whose situation must be evaluated.”
Collomb said that the government “has decided to welcome those who are refugees from theatres of war, who are political prisoners” but that it would also try to pursue “a policy that allows economic migration to be managed differently”, referring to the government's “asylum and immigration” bill which has not yet been finalized.
He also confirmed the harder stance towards illegal immigration. “Of course, I think that those who are denied the right to asylum must be expelled,” he said, adding that more than 14 percent of those would be asked to leave France during the first eleven months of next year. Photo: Collomb speaks to journalists during a visit to Calais in June.
Rights groups are worried
Meanwhile rights groups are openly worried about what they see as a definite political shift from the government, with several associations including Cimade, Emmaus and Fondation Abbé Pierre calling on human rights defender Jacques Toubon to take a stance against the still unpublished bill.
Toubon said on Monday that Collomb's words represented “a complete change in our policy”.
“What the government wants is more deportations: that people who do not have a title can be removed more effectively and quickly. The situation of vulnerable people is not [taken into account],” he said.
Florent Gueguen from FAS (Federation des acteurs de la solidarité) says thousands of migrants will simply return to living on the streets if they feel the accommodation centres are like traps”.
And caution was recommended by another member of President Emmanuel Macron's La Republique en Marche! party.
“We must strengthen the measures with regard to illegal immigration and at the same time we must maintain this tradition of the right of asylum. But if we want it to work, we must welcome these people, which is not the case today,” said Richard Ferrand, MP for Finistère in Brittany in an interview with BFMTV.
“We need to speed up the processing of asylum issues, and be firmer and give clear signals of illegal immigration,” he said. People and members of various associations take part in a demonstration in support of migrants in Menton. Photo: AFP
But this isn't the first time the Interior Minister has courted controversy for his approach to France's migrant situation.
In June, Collomb warned that Calais risked developing a “migrant abscess” and had previously argued that the provision of services could have a pull effect on migrants who trek across Europe to Calais in the hope of hiding away on a truck crossing the Channel to the UK.
The government later softened its tone, with Macron promising in August to find temporary shelter for all those on the streets by the end of the year.
In July, Human Rights Watch published a report called “Like Living Hell” which described the use of pepper spray against migrants massed in the northern coastal city as “routine”.

In June, Macron told the Council of Europe: “We have to welcome refugees, it's our duty and our honor.”