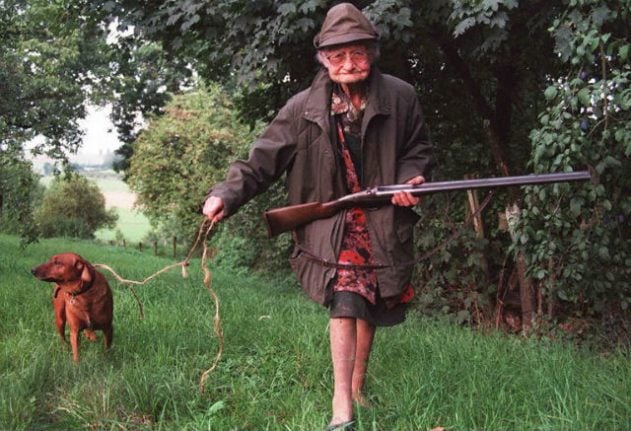 ARCHIVE Photo: AFP Picture dated 29 August 1996 of 90-year-old Anna Chaillard, still an active boar hunter walking with her dog Titi in the surroundings of Huanne, central France.
Anyone who moves to rural France knows that they will have to make adjustments to adapt to the local customs and way of life.
But while shop opening hours, French bureaucracy and language issues can all be troublesome they are not life threatening. Unlike the sport of hunting.
In recent years, The Local has reported on how joggers, hikers, mushroom pickers, motorists, even gardeners and indeed hunters and their family members have routinely been killed by stray bullets from rifles that were meant to kill wild boars, deer or pheasants.
Those living in rural France have learned to take precautions.
“I grew up learning how not to go outdoors during hunting season, making sure to wear brightly coloured clothes and pretty much being terrified of getting shot during those times because it's something that sadly happens very regularly,” Julia Kornig who grew up in the Vaucluse tells The Local.
READ ALSO: With one million hunting aficionados across the country, the past-time is more popular in France than anywhere else in Europe. And with so many people wielding rifles, especially at weekends, fearful residents in rural France are forced to adjust their daily routines and miss out on beloved leisure activities.
Kene Ovenshire, a veteran of the US Airforce, who now lives in the Landes department of south west France told The Local: “My experience here in south west France during hunting season is that this is more of the Wild West than anywhere I've ever lived or visited in the US.
“I have a small 11 hectare farm, my home sits right in the middle of my property. My wife and I have eight horses and we enjoy riding on the paths that surround our home.
“But during hunting season we do not ever go out for walks, hikes, or bike rides. The hunters in our area are constantly coming within more than 150 meters of our home, on our property, and cracking off shots at the game they are hunting – pigeons, sanglier, deer, whatever.”
Claire Younghusband who lives in an old farmhouse on the border of the Lot and the Dordogne said: “We are 'live and let live' types but we have experienced blind shots being fired scarily close and towards our buildings, hounds in the garden and on two separate occasions one was left behind howling through the night.
“Just about every weekend and some weekdays from September to February there are convoys of 4x4s and mini vans tearing up and down our lane and through our small commune where there is very poor visibility and dangerous corners,” she said.
“We dare not enter our own woodland at this time of year and are increasingly concerned about being in the garden when we can hear the dogs,” she added.
Another woman, named Romke, said: “I live in Nouvelle Aquitaine after 25 years living in the Herault before that. I have always have had dogs so am careful when and where I take them out.
“On the days of 'la chasse' I either walk the dogs very early, or during lunch time.”
Many other dog walkers take similar precautions to avoid being on the wrong path at the wrong time.
Another reader Deb Adcock, who lives in Charente said: “I'm frightened to go walking with my dog on Sundays.The hunters even venture onto roads where I live. They do not respect the hunting laws and regularly do not wear high visibility vests and let their dogs run riot, the worst aspect of living in rural France.
“We don't feel safe on public footpaths during the hunting season . I now wear a bright red hat and my dog a bright red coat on our daily walks.” A woman named Maureen, who lives in the Vendee, western France sad: “I have a dog that is walked twice a day. I am always careful to choose safe areas that I drive to rather than walking in the immediate vicinity.
“Hearing shots almost every day upsets me especially when I often spy deer and less often wild boar. Reading reports of people being killed and injured is even more soul destroying.”
These are not rare accounts of paranoid individuals who hide under the kitchen table all weekend.
A recent poll published in Le Monde newspaper by animal rights group the Brigitte Bardot Foundation revealed that 71 percent of people in France felt unsafe when out walking in the countryside during hunting season.
That figure has risen fairly dramatically compared to 54 percent who felt unsafe when the survey was carried out in 2009. According to the Brigitte Bardot Foundation the steep rise in feelings of insecurity can be explained by some shocking incidents in recent years that left innocent people dead.
Perhaps the one incident that raised the most attention was the shocking and saddening account of a grieving Frenchwoman whose partner was killed by a hunter's bullet when the pair were out for a jog.
She penned an emotional post on Facebook to tell of how a regular morning jog in the foothills of the French Alps turned into a nightmare due to a hunter's bullet.
“We live at the foot of the Semnoz and have enjoyed trail running for many years. We know the hunting periods, the signs and the rules…
“On this Saturday December 5th, we did not come across any sign on the paths we took.
“We did however cross paths with a hunter around 100 metres before the shot was fired. We said hello to him but he did not respond, instead he turned his back, rather than making us aware that there were six or seven hunters higher up the track.
READ ALSO: Grieving French widow slams 'killer' hunters “We were speaking loudly, I was dressed in pink and blue, the ground was open and we were about 10 metres from the road that goes up to Semnoz.
“One minute later, I heard a terrible shot and I turned around to see my husband was on the ground, the bullet had blown his jaw apart
“On that day, we followed the rules, not them. On that day, my husband was not the victim of an accident, he was killed. On that day, we came across murderers.”
Reacting to that death Mark Giraud from the organisation ASPAS, which has led the campaign to introduce restrictions on hunting summed up why there needed to be changes to protect those living in the French countryside.
“Going out for a walk or a run is not like mountain climbing, where the participants take their own risks.
“It is a leisure activity. It's not normal to be killed,” he told The Local.
But those living in rural France don't expect any change soon, given the power of the hunting lobby in France. Most accept they will have to continue to take cover during hunts.
“As immigrants we do not feel that we should be critical of the way of life here but do feel it needs stronger regulations such as restricted to one day a week and kept further away from inhabited areas,” says Claire Younghusband, who lives on the border of Dordogne and the Lot.
“Sadly, we do not believe that anything will change any time soon as there are too many off duty police officers and municipal officials that enjoy the 'sport' and the general public does not seem to be inclined to get behind an anti-hunt lobby.”
American Kene Ovenshire from the Landes department has regularly confronted hunters near his farm.
“Their tradition is so deeply ingrained in them that my 'complaints' are always offensive to them,” he told The Local.
“I've resided to the fact that this is the way it is here – there's nothing it seems that can be done other than tolerate them as best I can.
“But stories like the one today where the hiker was shot by a hunter certainly comes as no surprise.
“I am sure that most of the hunters are responsible, law abiding citizens. But it's the ones that are not so responsible that scare the crud out of me.” 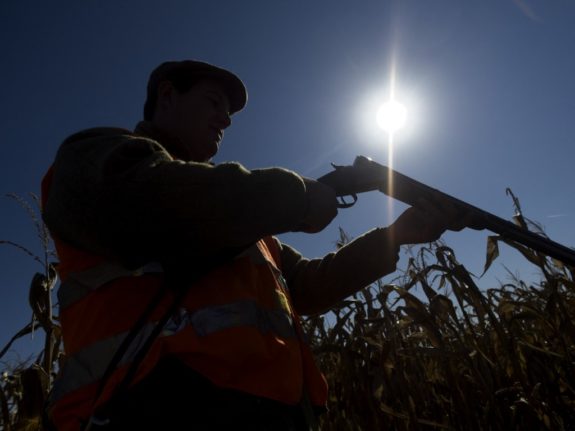 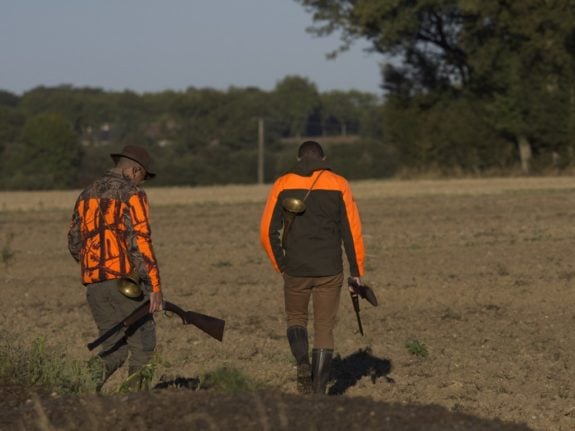