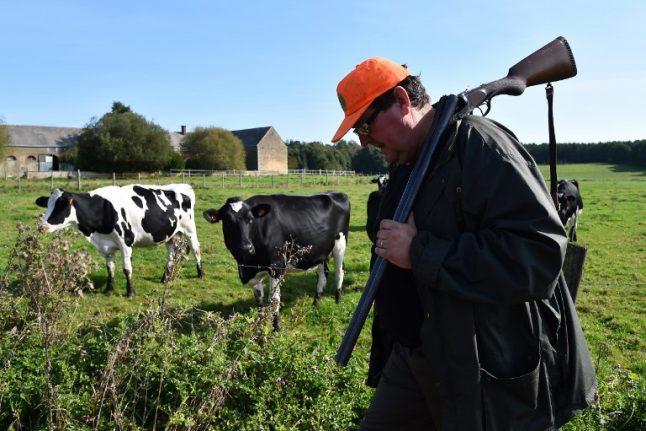 Photo: AFP
So far during the 2017-2018 French hunting season which started in September there have been nine people killed.
Three of these were people were unconnected with the hunt and one of these victims was sitting in her own garden.

On average there are around 20 deaths each year. In recent years, The Local has reported how joggers, hikers, mushroom pickers, motorists, even gardeners have routinely been killed by stray bullets from rifles that were meant to kill wild boars, deer or pheasants.
But what can be done to solve the number of deadly accidents?
What the anti-hunting lobby says
Anti-hunting groups blame the hunting community's lack of regard for the rules around hunting.
“They don't respect the rules and they don't want to be controlled,” said Marc Giraud, spokesperson for French anti-hunting group ASPAS.
“They are masters of their own world and the rules as they stand at the moment are insufficient,” he added.
READ ALSO: ARCHIVE Photo: AFP Picture dated 29 August 1996 of 90-year-old Anna Chaillard, still an active boar hunter walking with her dog Titi in the surroundings of Huanne, central France.
ASPAS has been campaigning for hunting to be banned on Sundays for several years which Giraud said he believes would cut down on the number of deaths.
“There are around 20 deaths in hunting accidents each year and about 300 injuries, but France is the only country in Europe where hunting is not banned around the country on at least one day of the weekend,” he told The Local previously.
“We need to remember that hunters often suffer themselves. They or their family members are often the ones killed in these accidents.”
“But it's worse when it's people who aren't involved in hunting because that spreads fear among people who are trying to live their normal lives.”
ASPAS would like to see more breathalyzer tests conducted on hunters before they are allowed to go out with their guns. For Giraud the same rules that apply to driving should apply to anyone who picks up a gun.
“One of the big problems is that breathalyzer tests are not obligatory and are only carried out in some departments,” he said. Photo: AFP
“When you have a rifle in your hand, you are in charge of a lethal weapon, just like car drivers. Yet we have laws against drink-driving. It should be the same for hunters,” he told The Local.
One of the main barriers for change in the situation is the power of France's hunting lobby which Giraud says is the “most powerful lobbying group in the National Assembly”.
The government, already conscious that rural France is suffering from a farming crisis, might not want to take on that lobby. But for ASPAS, there is only one way to prevent the accidents.
“The only way you'll stop the accidents altogether is by stopping hunting,” he said.
What the residents say
Those living in rural France don't expect any change soon, given the power of the hunting lobby in France. Most accept they will have to continue to take cover during hunts.
“As immigrants we do not feel that we should be critical of the way of life here but do feel it needs stronger regulations such as restricted to one day a week and kept further away from inhabited areas,” says Claire Younghusband, who lives on the border of Dordogne and the Lot.
“Sadly, we do not believe that anything will change any time soon as there are too many off duty police officers and municipal officials that enjoy the 'sport' and the general public does not seem to be inclined to get behind an anti-hunt lobby.”
American Kene Ovenshire from the Landes department has regularly confronted hunters near his farm.
“Their tradition is so deeply ingrained in them that my 'complaints' are always offensive to them,” he told The Local.
“I've resided to the fact that this is the way it is here – there's nothing it seems that can be done.
“Other than tolerate them as best I can.” Photo: AFP
What the hunters say
The National Hunters Federation in France has stressed that it is taking measures to improve the situation.
“It's harder to get a licence now and the accidents that we see during the hunting season are usually people who are older, who got their permits a long time ago,” Julie Miquel, head of communications at the federation told The Local.
“The number of accidents is falling and will continue to do so now it's more difficult to qualify for a licence,” she added.
Miquel also puts the “unusual” number of non-hunter deaths that have occurred so far this season down to the unseasonably warm weather.
“One accident is one too many,” said Miquel. “But usually it's hunters that are killed during the hunting season rather than members of the general public.
“This year however the number has gone up because people have been making the most of the warmer weather and have been out walking in the countryside more than they normally would.”
Statistics released by France's national hunting and wildlife office show that the number of accidents reported from June 1st 2016 May 31st 2017 stood at 143 in total, which showed a drop on the previous year's figures.
However this isn't the whole story. While the total number of accidents did fall, the number of deaths rose by 80 percent, from 10 to 18.
Miquel says the accidents are usually a result of “tired” hunters and are “definitely not down to alcohol intake”, which others have pointed to as a contributing factor in the past. Photo: AFP
Although she added that hunters are not required to take a breathalyzer test before hunting.
“It's more a question of judgement, like if someone left a restaurant after a few drinks and was deciding whether to drive home or not,” said Miquel.
And what about the rise in deaths this year among members of the public?
Miquel said: “We have been looking into the subject of cohabitation of natural spaces for many years. One of the problems is that some areas that were once clearly forest aren't anymore, as the population rises and more and more houses are built in rural zones.”
“But it is a good question and we're looking at how we can better communicate with hunters. We'd also like to introduce more regular training for hunters who got their permits a long time ago.”
One of the problems with this however is that different departments are responsible for making the ultimate decisions on subjects such as this and rules cannot be enforced by the head office, said Miquel.