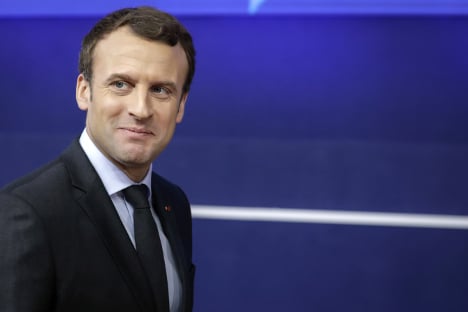 Macron, who turns 40 on Thursday, is spending the weekend with his wife Brigitte and extended family at the chateau of Chambord in France's Loire Valley, the French daily La Nouvelle Republique reported.

Macron and his family will stay at one of the cottages on the vast estate, French media said, with a birthday gala to be held Saturday evening in one of the castle's 440 rooms.

The Elysee Palace said Macron and his wife were using private funds to pay for their stay.

But the choice of venue was still criticised from some French politicians.

“Why is he celebrating his birthday at Chambord?” asked radical-left firebrand Jean-Luc Melenchon, quoted in the newspaper Le Figaro.

“What a strange idea! I am so republican that everything about royal symbols exasperates me, I find it ridiculous,” he said.

“Eras go by but the oligarchy remains cut off from the people,” he said.

Commissioned nearly 500 years ago by King Francois I (1494-1547), the immense chateau remains the largest of the Loire grand estates, boasting 365 chimneys and a 5,500-hectare (21-square mile) estate.

It also has boasts the largest enclosed forest park in Europe, a long-time favourite for presidential hunts.

The chateau, which attracts some two million visitors each year, has been listed as a regional UNESCO World Heritage cultural site.

Macron, a media darling during his campaign, has seen his image as a monarchical or even “pharaonic” leader climb from the night of his election, which featured a theatrical production at the foot of the Louvre pyramid in Paris.

Several newspapers have also expressed unease over the growing concentration of power in the presidency, and critics have said his use of executive orders to ram through landmark reform in September did not help matters.

In July, the cover of the left-wing Liberation newspaper mockingly depicted him as Jupiter, the Roman king of gods, and accused him of failing to share power — an accusation echoed by Le Monde daily.

Jupiter is now regularly used by Macron's critics who accuse his centrist government of favouring the rich.

Macron, his wife and several relatives went to the zoo in the village Saint-Aignan-sur-Cher after having lunch at the nearby Le Bacchus restaurant, an AFP correspondent said.

Brigitte, in one of her most high-profile outings since her husband's election, cooed over the panda cub at a ceremony on December 4th before a Chinese minister unveiled its name as Yuan Meng, which means “making a dream come true” in Chinese.

The French first lady became “godmother” of the panda, along with her Chinese counterpart Peng Liyuan.