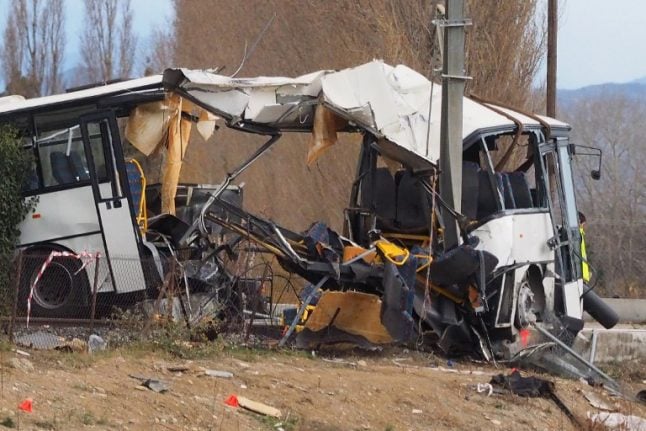 Photo: AFP
What happened?
A school bus, which was carrying around 20 pupils from a local secondary school, was struck by the train in Millas about 18 kilometres west (11 miles) of the city of Perpignan, close to the Spanish border.
On Friday morning the death toll stood at five children, after two 11-year-old girls succumbed to their injuries. Around another 20 were wounded. Ten of those wounded are in a critical condition in hospital. The dead and critically injured were all travelling in the bus.
Twenty-five passengers were on the regional train as well as a driver and an agent being trained. There was no serious injury or death among the occupants of the train, according to France's national train work SNCF.
What do we know so far about the accident?
A TER train running on the line hit the bus on Thursday at 4.10pm at crossing No. 25 in Millas.
France Bleu regional radio reported that the train ploughed into the rear of the bus. Pictures posted on French media showed the bus had been severed in two.
Robert Olive, mayor of neighbouring Saint-Feliu-d'Amont, described the scene as a “vision of horror”.
“The coach was really cut in two by the train as it passed,” he added.
The graphic below from Le Parisien newspaper shows how and where the accident took place. What caused the accident?
Investigators are now tasked with the job of finding out exactly what happened at the scene and specifically whether it was a case of human error or a techical problem that led to the crash.
Various investigations have been opened to determine the cause of the crash. But the question everyone is asking is why did the bus pass through the level crossing when a train was approaching?
The level crossing is described as a “classic” model, with automatic signals and two barriers. French rail chiefs SNCF said it was not considered to be particularly dangerous.
The train is believed to have been travelling at around 80km/h – the normal speed for the line.
Attention on Friday morning was focussing on the barriers at the level crossing. Photo: AFP
There have been conflicting reports from witnesses, some who reported seeing the barriers up and others who said they were definitely down. Other witnesses said the level crossing was not lit up, meaning perhaps the bus driver just did not see it in time to stop.
Images taken after the crash showed the barriers were broken, but it is not clear at one point they were smashed; it may have been the bus or it may have happened during the collision.
The national railway operator SNCF told AFP that “according to witnesses, the level crossing was working as normal” but that an investigation would be carried out to confirm the cause.
Prosecutor Jean-Jacques Fagni told the media on Thursday evening that it was too early to know if the barriers were up or down.
He was questioned about a possible “malfunction” and whether key technical components at the crossing may have been stolen.
These questions will no doubt be a priority for investigators.
The driver of the bus is a key witness and she was expected to be questioned at some point, but remains seriously injured. Tests will be or perhaps have already been carried out to determine the level of alcohol in her blood. Similar tests will be carried out for the train driver.
France's minister for Transport Elisabeth Borne urged caution on Friday stating that in 98 percent of cases, these kind of accidents are caused by driver error.