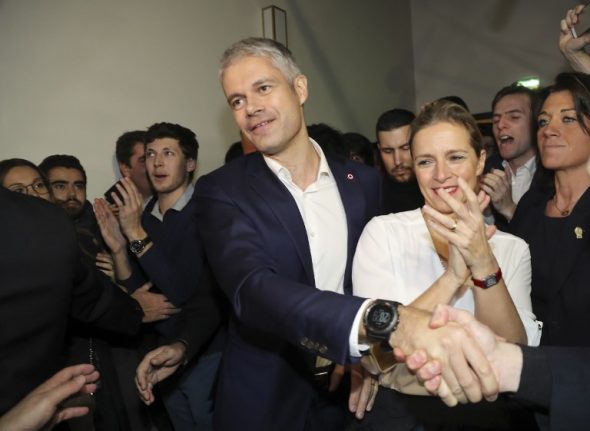 Wauquiez was elected head of the centre-right Republicans on Sunday, running on a hard-right platform that has seen him accused of cosying up to far-right National Front (FN) voters.

Twenty-four hours later, Xavier Bertrand, a party heavyweight from the northern Pas-de-Calais region, quit the Republicans — the first of a handful
of politicians to walk out.

“I no longer recognise my political family, so I've decided to quit,” Bertrand, a moderate who served as the party's secretary-general from 2007 to
2010, said Monday evening, accusing Wauquiez of “aggressiveness”. On Tuesday, the mayor of the northern town of Roubaix, Guillaume Delbar, followed suit, as did two other Bertrand loyalists in the north.

Explaining his decision, Delbar said: “I cannot stay in a party whose leader did not choose clearly between Emmanuel Macron and Marine Le Pen”.

Delbar was referring to Wauquiez's refusal to endorse Macron over the FN leader in this year's presidential election after the Republicans candidate,
Francois Fillon, was knocked out of the race.

Mainstream parties of the left and right have traditionally rallied around the FN's opponent in the final round of elections to block the far-right's
path to power.

But Wauquiez, a 42-year-old devout Catholic who takes a tough line on immigration and security, stopped short of backing Macron, only calling on
voters to “not vote for Marine Le Pen”.

Celebrating his election as party chief on Sunday, Wauquiez vowed to lead a “renaissance” of the right.

He romped to victory over two little-known rivals, winning 75 percent of the votes cast by close to 100,000 party members.

But he faces a tough task to rebuild the once powerful party — it changed its name from UMP to Republicans in 2015 — which has lost millions of voters and several party heavyweights to Macron.

Analysts have said the only way the Republicans can survive Macron's centrist offensive is by tacking to the right to win voters from the FN — at
the risk of turning off more moderates.

On Tuesday, Wauquiez took a swipe at the departing Bertrand, saying it was “unacceptable to slam the door in this way”.

But he also attempted to heal party divisions.

“Come as you are. I need you,” he was quoted as telling Republicans lawmakers at a meeting, calling for “unity”.

Over one million people took to the streets of France again on Tuesday to protest against the “cruelty” and “brutality” of a modest pension reform.

The crowds – 1.27m  in total –  were probably the biggest of their kind since December 1995 when the late President Jacques Chirac was eventually forced to dump a similar (but more radical) change in the French retirement system.

On the other hand, a second 24-hour strike against the wicked notion of working to the age of 64 was substantially weaker yesterday.  Trains, schools, oil refineries, power stations and government offices were disrupted but much less so than on the first “day of action” on January 19th.

Who is winning the war?

The government has certainly lost the communications battle. It had hoped that opposition to its pension reform would be melting by now. The numbers opposing the change have grown on the street and in the opinion polls.

And yet President Emmanuel Macron and Prime Minister Elisabeth Borne show no signs of giving way.

Cold feet among the government’s parliamentary troops and allies on the centre-right will no doubt grow colder. There will be some extra concessions for women who have broken their careers to start families and, maybe, for people who started work in their teens.

But Macron is determined to stand by the “cruel, brutal, unjust” proposal that by the year 2030 French people should work officially until they are 64 – when most Europeans  already work until they are 65 are older.

He has little choice. He has painted himself into a corner.  His second term, scarcely begun, will be a domestic wasteland if he gives way.

We are therefore only at the start of the conflict. There will be two further days of action, or inaction, on Tuesday, February 7th and Saturday, February 11th. The text of the reform will go before the National Assembly on Monday.

The country is likely to be disrupted, periodically and maybe continuously, until the end of March.

The eight trades union federations have been unusually united so far. They have agreed a pattern of one-day strikes and marches of increasing frequency in the hope that rising numbers on the streets will somehow convince Macron that he cannot reform France against its will.

The small increase in the size of marches nationwide on Tuesday was a victory for the unions of sorts. But it fell short of the kind of mass revolt – 1,500,000 or more on the streets – that some union leaders had hoped for.

Radical voices within the union movement, including Philippe Martinez, the leader of the Confédération Générale du Travail (CGT) now suggest that it is time to shift to a strategy of continuous strikes in key industries, from railways to oil refineries to power plants. Some sections of his federation are already threatening open-ended stoppages to try to bring the country to its knees.

It was, they point out, long strikes on the railways and elsewhere which forced Chirac to back down in 1995, not the scale of the marches on the street.

The more moderate union voices, led by Laurent Berger of the Confédération Française Démocratique du Travail (CFDT), say such a strategy would be a calamity. Long queues at petrol stations or a long shut-down on the railways and Paris Metro would anger public opinion.

The February holidays are approaching. A collision threatens between two French popular obsessions: the right to go on holidays and the right to retire early.

If the unions disrupt holiday travel, Berger points out, they will lose the support of part of the public on the sanctity of early retirement.

There is therefore a strong possibility that the united union front will shatter in the next couple of weeks.

Macron also face a strategic choice between soft and hard lines. That choice may already have been made.

Macron and especially his Prime Minister Elisabeth Borne have tried so far to make the consensual argument that reform is needed to make the state French pension system more “fair” and to protect it from eventual collapse. That may be true but it is not immediately true.

Their hope was that voters of the centre and moderate left could be persuaded reluctantly to support a just and necessary reform. That approach has failed.

There are signs that Macron is switching to a different argument.

The French pension system is in permanent, massive deficit – €33 billion a year, equivalent to half the defence budget, is taken from general taxation to stop the pensions system for retired public workers from going bust.

The present system is a kind of official Ponzi scheme which only survives if active workers and their employers  pay the pensions of the retired. But there is a  permanent imbalance, which will grow worse in the years ahead. Only massive subsidies from the taxpayer keep the Ponzi scheme alive.

The pension system therefore acts as a ball-and-chain on the French economy, Macron and his government argue. It needs to be reformed, not just for the sake of future pensioners but for the sake of creating jobs now.

There is a great deal of truth in that. But it is, in French terms, the kind of unashamedly “right wing” or liberal argument, which Macron and Borne had hoped  to avoid.

The new government communications strategy abandons all hope of persuading the broad Left. It is aimed at centre-right voters and especially at centre-right opposition deputies whose votes the government needs to push the reform through the National Assembly.

The centre-right Les Républicains have long made exactly the economic argument about pension reform that Macron is now making. He hopes to galvanise, or embarrass, the waverers in their ranks.

Whether that works any better than the previous “just reform” argument remains to be seen. The French centre-right has never been celebrated for its consistency.

In any case, the government appears to be preparing not just one but two constitutional “jokers” or “trumps” to ensure that it wins the parliamentary card game on pension reform.

On top of Article 49.3 (which allows some legislation to be approved by decree without a normal vote), the government is considering cutting debate in the Assembly to 20 days by using the rarely employed “guillotine” powers under Article 47.1.

Either would be cue for much shrieking by the opposition and much anger, and some violence, on the streets. Macron’s popularity, already shrinking, would doubtless collapse.

In a sense, he has nothing to fear. He cannot run again. Après moi le déluge. It would be left to his potential centrist successors to pick up the pieces in 2027 against an emboldened Far Right.

But what a mess. What extreme methods – and what potentially extreme consequences – to enact what is, in all conscience, a sensible and modest reform.