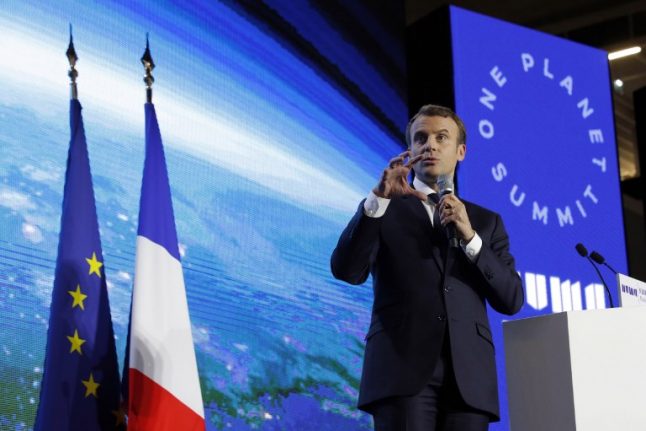 They were among 18 beneficiaries of a Macron-led initiative to boost climate change research in the face of Trump's rejection of the Paris Agreement to limit climate change.

“I do want to thank you for being here, for your answer to this first call, your decision to move and come to Paris,” the French leader told the chosen few at an event dubbed: “Tech for Planet” held on the eve of his “One Planet Summit”.

“One of our main perspectives is obviously to address the current challenges of climate change,” he said, but also “to boost your research, to boost your initiatives, and to be sure that here you have help in order to deliver more rapidly and to do more.”

Macron made the offer after Trump, who has dismissed climate change as a “hoax”, announced in June the United States would withdraw from the Paris pact, painstakingly negotiated by nearly 200 nations over more than two decades.

The US is the only country to reject the agreement. Speaking on the eve of the One Planet Summit, two years to the day since 195 nations adopted the climate plan, Macron rejected the idea that Trump
could negotiate a fresh deal and termed his withdrawal an “aggressive” maneuver.

The French president said: “I'm sorry to say that, it doesn't fly, so, so sorry but I think it is a big responsibility in front of the history, and I'm pretty sure that my friend President Trump will change his mind in the coming months or years, I do hope.”

He added: “It's extremely aggressive to decide on its own just to leave, and no way to push the others to renegotiate because one decided to leave the floor.

“I'm not ready to renegotiate but I'm ready to welcome him if he decides to come back.”

Trump has asked Congress to slash the climate research budgets of federal agencies, threatening billions of dollars and thousands of jobs.

Macron's 30-million-euro pledge has since been matched by French universities and institutions, enough to pay for five-year postings for 50 scientists. More beneficiaries will be chosen later.

Junior researchers will be alloted up to one million euros over four years, covering their salaries, two doctoral students, and expenses.

Senior researchers will each have a 1.5-million-euro budget that provides for two assistants and two students. Spouses will be given French work permits.

“Make Our Planet Great Again is an unexpected opportunity,” Alessandra Giannini, a researcher at The Earth Institute at Columbia University, one of
the 18 recipients, told AFP.

For fellow beneficiary Nuria Teixido of Stanford University, the initiative was an important recognition “that science plays an important role” in
confronting the problem of climate change.

It follows just weeks after the 23rd annual Conference of Parties to the UN Climate Convention, which was held in Bonn.

The US president's rejection of the Paris pact threw a long shadow over the talks in Germany, where officials from Washington defended the use of fossil fuels blamed for global warming.

Trump was not invited to the latest talks, and Washington will be represented by an embassy official.

The gathering will look at sources of finance, public and private, to help countries make the costly shift to cleaner energy sources and to raise their
defences against climate change impacts such as sea-level rise, harsher droughts, floods and superstorms, and disease spread.

Rich nations have pledged to muster $100 billion in climate finance for developing nations per year from 2020.

On 2015 trends, total public financing would reach about $67 billion by that date, according to a report of the Organisation for Economic Cooperation
and Development (OECD).

Trump has said the United States — which had pledged $3 billion towards the Green Climate Fund, of which it delivered $1 billion under Barack Obama — would not fulfil its climate finance commitments.

On Monday, UN climate chief Patricia Espinosa said “a practical path forward for finance is needed” if the brakes were to be put on climate change.

Political agreements “will not be enough if we do not update and reset the global finance architecture and make all developement low-emission, resilient and sustainable,” she said.