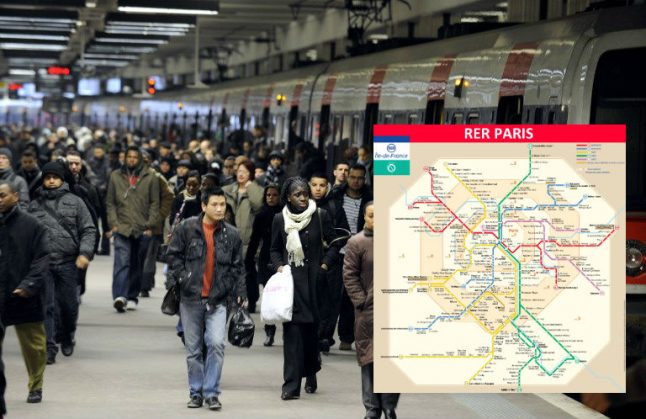 Anyone who uses the RER A and RER B train lines in Paris might need to think about finding an alternative form of transport on Tuesday.

Drivers on the two commuter lines are to hold a 24-walkout on Tuesday meaning services will be drastically reduced, especially at off-peak times.

The strike, which has been called for by four unions to protest over a “dysfunctional” organisation, will run from Tuesday 4am to Wednesday 7am.

On the RER A – Europe's busiest train line – which runs from west to east through the centre of the city and serves the business district of La Defense, only half of normal services will be operating at rush hour.

For off-peak times services will be reduced even further meaning the 1.2 million passengers who use the line each day will face major disruption.

And trains for Cergy and Poissy will terminate at La Defense.

It will be a similar story for the RER B which serves both Charles-de-Gaulle and Orly airports and carries 875,000 passengers each day.

During rush hour only 50 percent of trains will operate, and for off-peak times only a quarter of services will be running.

All passengers will have to change trains at Gare du Nord, so airport passengers need to take note. There is at least good news for Metro passengers with services set to run as normal throughout the day on all lines.

Services on Lines 1, 4, 13 and 14 will be increased to ease the pressure on the RER services.

Bus and tram services will also run as usual.