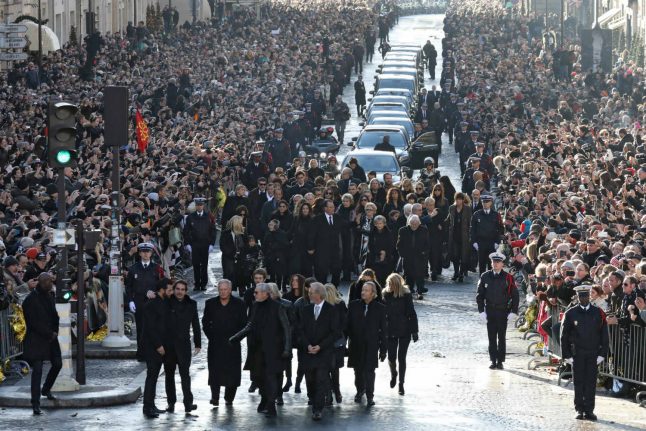 Tens of thousands of people lined the Champs Elysees to watch his white coffin, escorted by some 700 bikers, descend the great ceremonial avenue in what was a state funeral in all but name.

Diehard fans of the leather-clad “French Elvis” began to gather overnight in the centre of the French capital for an outpouring of emotion for a singer not seen since the death of Edith Piaf.

As the huge cortege paused in front of the grand Madeleine church where French President Emmanuel Macron waited on the steps with the singer's family, the throng — many in tears — began chanting over and over, “Johnny, Johnny, Johnny Hallyday”.

READ ALSO: 700 bikers and hordes of French fans to take over Paris for Johnny Hallyday homage

“He was part of us, part of France… its prodigal son who suffered terribly, furiously on stage for us. Johnny was ours… because Johnny was a lot more than a singer, he was life,” the president added.

Hallyday, once condemned as the rock 'n' roll “corrupter of youth” who went on to become a very French cultural icon, died of lung cancer on Wednesday.

With an untipped Gitanes cigarette often at his lip, he held France entranced for five decades with his spectacular stage shows and equally colourful private life, reinventing himself for each generation.

A huge portrait of the singer hung from the facade of the grand Madeleine church, with fans — hundreds of whom had spent the night in the surrounding streets — singing his songs and doing the twist to keep warm on a bright but freezing cold morning.

Television stations cleared their schedules to broadcast the “people's tribute” live, ensuring that the “beast of the stage”, who sold more than 110 million records, went out with one last big show.

The ceremony was scheduled to end with a concert by his band in front of the Madeleine, which also hosted Chopin's funeral in 1849. That the French government had to invent a new type of ceremony to honour the singer, who was almost unknown outside the French-speaking world, speaks volumes about his pop cultural cachet.

“He was someone who really counted in French people's lives,” said former president Nicolas Sarkozy, a huge fan who officiated at the singer's fifth marriage and tried to lure him back from tax exile.

“For lots of people Johnny represents the idea of happiness. He leaves a huge hole,” he added.

But for some in Hallyday's white working-class fan base, the fact that he will be buried in the French Caribbean island of Saint Barts — where he had a home — added to the heartache.

Veteran French pop star Michel Polnareff, an old friend of the star's, said Friday that he found it “strange that his fans should be deprived of Johnny” in this way.

Others found it hard to swallow that an idol adored for his “ordinariness and simplicity” should be laid to rest in a millionaires' hideaway.

His body will be flown to the island on Sunday morning and buried on Monday.

One fan, Francois Le Lay, told AFP that “we would have preferred if he was buried in Paris, but if Johnny wanted that, we will respect it”.

“My wife and I will put the money aside that we would have spent going to his concerts so we can fly to Saint Barts one day,” he said.

Other fans demanded that a monument be built in France to the star, who was abandoned by his parents as a baby and brought up by an aunt and uncle, who were cabaret performers.

While not all French people were taken by his often derivative American-rooted rock, with one critic labelling him “France's independent musical nuclear deterrent”, his mark on national life was undeniable.

“There is a before and after Johnny Hallyday,” said Michka Assayas, author of the “New Dictionary of Rock”.

Philosopher Raphael Enthoven said it was difficult to overplay the effect of Hallyday's passing. “He was an idol. His death is that of a god who was in fact mortal,” he told French radio.

“People say they can't believe he is dead because their belief in him will never die. Many people never believed that Elvis died. It's the same for Johnny.”