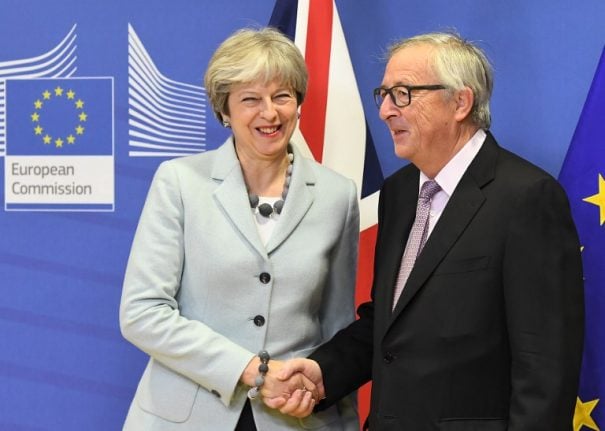 After months of fraught Brexit negotiations British Prime Minister Theresa May heralded an agreement with the European Commission on Friday that covered three thorny issues: the Irish border, the divorce settlement and citizens' rights.

The initial deal brought smiles to the face of May, who was probably in danger of losing her job if talks had broken down again, but left British citizens living in France and other EU countries less than happy.

While the deal guarantees their rights to remain and work in France (although that was never really in doubt) the agreement does not guarantee them the right to continue moving freely around Europe, as is the case currently.

In the small print of the agreement it says the issue of freedom of movement was “outside the scope” of the initial negotiations, meaning the rights of Brits living in France to be able to move and work freely in other EU countries may depend on how trade negotiations go.

The group British in Europe, which represents the 1.2 million British citizens living in the EU accused the government of “negotiating away our rights” and said “the deal was even worse than expected”.

British in Europe's chair Jane Golding described it as a” double disaster”.

'We are bigger bargaining chips than before'

“This deal is even worse than we expected. After 18 months of wrangling the UK and EU have sold 4.5 mn people down the river in a grubby bargain that will have a severe impact on ordinary people’s ability to live their lives as we do now.”

Kalba Meadows who runs the group Remain in France Together, which is linked to British in Europe told The Local: “This is far worse than we were expecting and hoping for and leaves us as greater bargaining chips than before, as freedom of movement and our other outstanding issues have to jostle with the issue of trade.

“Continuing freedom of movement has been deemed 'out of scope' – and yet this is so important for so many of our members.

“This isn't about the ability to visit friends in another country or pop over the border to do your shopping – many British people in France rely on freedom of movement for their livelihoods and without it they risk being unable to provide for their families.”

Another member of RIFT Craig McGinty added: “Some may have thought the battle was over, but it looks like the fight is still on. The issue of freedom of movement is going to be caught up in the second round of talks, meaning our rights could be tied up in agreements on how many widgets pass though Dover.

“Many of us have always feared it was always our rights May was gambling with and a key part looks to have been cast to one side,” he added.

'Yet more uncertainty for Brits in France'

While the future of Brits already living in France is secure, the agreement sets up the likelihood that they will have to apply for a residency permit to obtain “settled status”.

While each country has the right to decide whether to implement the scheme, the likelihood is if Britain sets up a residency card scheme for EU nationals living in the EU, France and other EU countries are likely to do the same.

That would give Brits in France two years from the official Brexit date to apply for settled status. It is likely that anyone who has a carte de sejour residency permit will be able to convert it into “settled status”.

“I think most UK people in France accept that some sort of residency paper is going to be required, EU citizens in the UK are going to face similar,” McGinty told The Local.

“And the authorities will need to have a record of who was here before whatever day Brexit is, here's hoping it is simple and not expensive to apply for.”

But for RIFT's Kalba Meadows, the agreement just throws up yet more uncertainty for Brits living in France.

“We don't know of course whether France would want to implement it, and it would obviously depend on the political will and situation – but the fact that this deal opens it up as a possibility is really disturbing, and just creates another level of uncertainty for Brits in France,” Meadows told The Local.