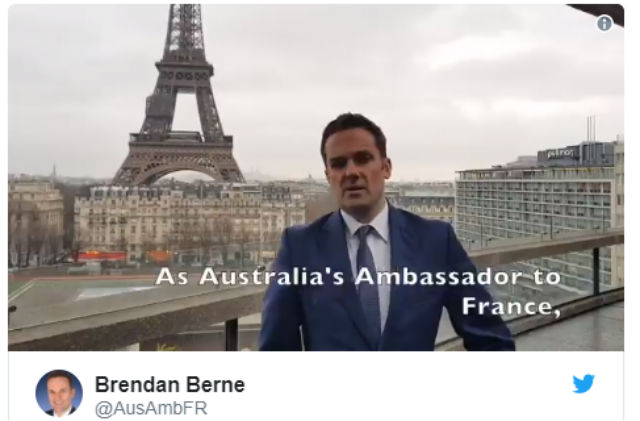 “HE SAID YES!” Brendan Berne wrote along with a video of his proposal.

“As ambassador to France, this is a great day for my country Australia which has passed marriage for all. But also for me personally,” Berne wrote.

Today was a great day for Australia and for me. HE SAID YES! #MarriageEquality pic.twitter.com/liaXiw0FYh

In the video, Berne stands outside his partner Thomas Marti's Paris office in the Australian embassy with the Eiffel Tower in the background, saying:

“Now it's my turn to confirm my relationship with my partner of 11 years, Thomas.”

Berne, 47, then heads into 37-year-old Marti's office, turning briefly to the camera to say “deep breath” before taking the plunge.

Admitting to being “a little nervous” and speaking in heavily accented French, Berne says: “I'd like to ask you a question. Would you please marry me?”

Aside to the camera: “I hope I got the question right.”

In response Marti gets up from his swivel chair for a long embrace with his new fiance.

Marti is a Swiss-Australian who works for Australia's foreign affairs and trade ministry, according to the embassy.

The couple met on a tram in Amsterdam and speak French at home, embassy spokesman Romain Parlier told AFP.

The tweet came less than four hours after the same-sex marriage bill sailed through parliament in Canberra.

Among other Australians soon to tie the knot will be the Liberal Party's Tim Wilson, who proposed to his partner Ryan Bolger while speaking on gay
marriage on the floor of the House of Representatives this week.

Same-sex marriage is now recognised in more than 20 countries, of which 16 are in Europe.

Austria's top court on Tuesday authorised same-sex marriage by 2019 at the latest.