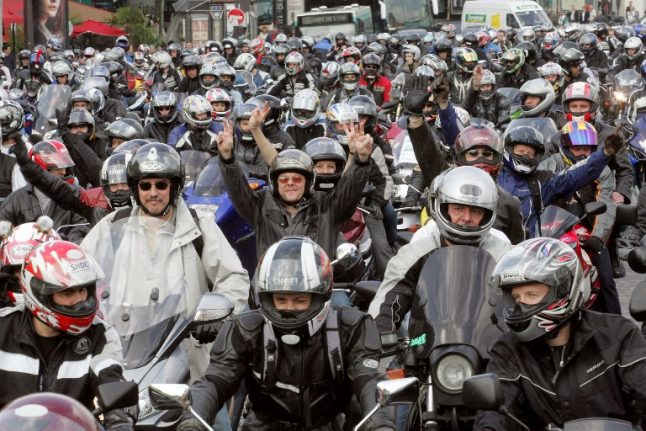 Fans will throng the Champs-Elysées on Saturday to bid a final farewell to their hero Johnny Hallyday as his funeral cortege passes down the grand ceremonial avenue from the Arc de Triomphe.

Reports suggest buses and trains to Paris have been booked up in recent days as Johnny fans prepare to flood into the capital from far and wide to honour their hero.

“Johnny Hallyday's musicians will accompany him musically” on his final journey, with the rocker's best tracks to be blasted out from the Madeleine church, where a memorial service will take place in the presence of President Emmanuel Macron, who will give a brief speech.

“The family and friends of Johnny Hallyday and the President have agreed that as a part of the popular homage, his funeral cortege will leave from the Arc de Triomphe and go down the Champs-Elysées” before continuing to the religious ceremony at Madeleine, a statement from the Elysée said.

Some 700 bikers will accompany the cortege down France's most famous avenue, after police accepted the request put forward by a Harley Davidson club.

“Bikers were asking us what we can do for Johnny and we proposed the idea of a parade to the police. They accepted. Johnny is the only man who could have made this happen,” said Stéphane Sahakian, president of France's Harley Owners Group. Bikers have been asked to wear a black armband for the occasion.

“To see 700 bikers go down the avenue will be a superb image,” said Sahakian.

The Eiffel Tower will also be lit up over the weekend with the message, “Merci Johnny” (Thank you Johnny), said Paris mayor Anne Hidalgo.

Hallyday is likely to be buried later in Saint Barts, the French Caribbean island where he had a home, its leader Bruno Magras told AFP Thursday.

He said the singer “told me several times he wanted to be buried in Saint Barts. Discussions are going on with the family,” he added.

French television channels cleared their schedules to broadcast tribute shows to Hallyday after Macron confirmed the star's passing on Wednesday, declaring that “there is something of Johnny in all of us”.

Hallyday first came to fame in the late 1950s yet remained a colossus in French popular culture by adapting to ever-changing musical tastes.

Former president Nicolas Sarkozy — an adoring fan who once tried to tempt him back from tax exile in Switzerland — said he represented “part of our personal history… our memories and emotions”.

Sarkozy conducted Hallyday's marriage to his fifth wife Laeticia, 42, while his predecessor Jacques Chirac made him a knight of the Legion d'Honneur in 1998. Yet the French establishment had not always been so warm to the flamboyant performer who, as he grew older, cultivated an air of a benign leather-clad pirate.

When he started belting out American rock more than five decades ago Hallyday was seen as a threat to a conservative France led by the stiff General Charles de Gaulle, with one radio announcer even smashing one of his records on air.

But he drove his young fans wild, attracting 100,000 to a Paris square in 1963 and prompting scenes of hysteria wherever he went.

Over the years he kept his bad-boy image alive with a colourful private life, ticking off many rock 'n' roll rites of passage, and was rarely off the front pages of celebrity magazines.

He was still filling stadiums as late as this summer when he teamed up with other veteran French rockers for the “Old Scoundrels” tour.

Hallyday had always dreamed of making it big in the US but never did, settling instead for living in Los Angeles, where he had a home in Pacific Palisades near Hollywood stars Tom Hanks and Ben Affleck.

Asked by AFP if that rankled, he replied, “It's better to be king in one's own country than a prince elsewhere”.