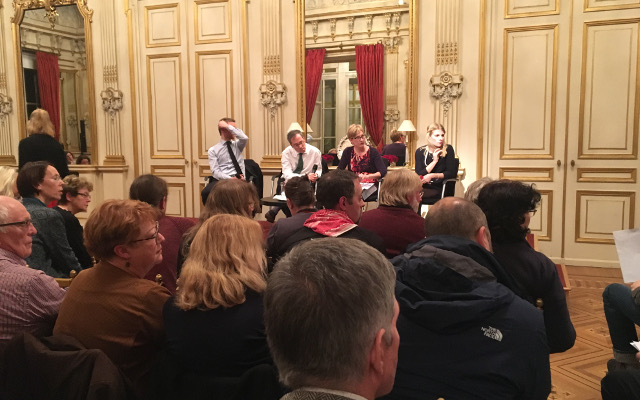 Photo: The Local
On Wednesday around 200 British citizens packed into the ambassador's residence next door to the embassy on one of the French capital's most illustrious streets, rue du Faubourg Saint-Honoré.
They weren't there for a garden party but to meet the UK ambassador to France Edward Llewellyn and his team who have been touring France in recent months to hear the concerns of Brits in France about how Brexit will impact their lives.
The meeting was one of a series held by the British Embassy in order to speak to the community in France and update them on Brexit negotiations, particularly regarding citizens' rights.
Given the real worry felt by many since the referendum result, the mood was tense at times as Brits shared their frustrations and concerns with the representatives of the British government. People voiced worries over issues as diverse as whether they would qualify for “settled status”, children's schooling, applying for French nationality and the future of their work contracts.
But while the questions mostly covered detailed aspects of people's personal situations, there was a clear desire from those present for more help from the government and the embassy in securing their futures in France.
One middle-aged woman went as far as to accuse the British government and embassy of having a “cavalier attitude” to establishing the rights of expats in France.
READ ALSO: While others asked exactly what was being done “to protect our rights” and expressed their belief that there had been a failure in negotiations between the UK and the EU.
Chris, who preferred not to give his full name, is a 37-year-old Brit who has been living in France for just a few months is concerned over the future of his work contract.
“I'm worried about what will happen once we're completely out of the EU if the government achieves the hard Brexit it is hoping to achieve,” he said. When the ambassador responded that Chris might be able to get some more concrete information about work contracts for people from outside of the European Union from the French authorities, there was an audible laugh in the room.
“Have you tried contacting the French authorities before?” Chris said. “I think you probably have a bit more sway than I do.”
During the meeting there were calls for a joint meeting between the embassy and representatives from the French government but the ambassador suggested it was unlikely to take place.
The extremely long delays people are seeing in applications for French nationality, which many expats are trying to obtain in advance of Brexit was raised by several members of the audience, who asked if the embassy could put some pressure on the authorities in France. But this is also unlikely to happen with Llewellyn making it clear that “this is a matter for the French authorities” as is true of many of the issues raised throughout the meeting.
Carte de séjour applications
He did however make it clear that the British embassy would wade in on situations involving British people who have applied to French departments for a carte de séjour residency permit but been told to come back after Brexit, as reported recently by The Local.
The embassy meetings have so far been held in Nice, St Raphael (Var), Brittany and another is due to take place in Poitou Charentes on December 11th.
The embassy is also keeping Brits in France updated on their rights as the Brexit negotiations continue through the government website, newsletter Voisins Voices and via Twitter and Facebook.
Officials said there would be further meetings once negotiations enter round two.
Judging from those who were at the meeting who spoke to The Local the overall feeling was that these meetings were useful but people are still not getting the answers to their questions that they are looking for.