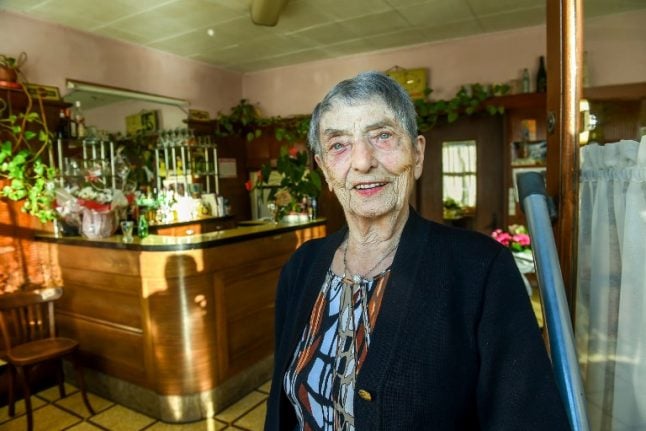 Marie-Louise Wirth wouldn't dream of giving up her bar in northern France, even if many of the 100-year-old's regulars have passed away.

The tall, blue-eyed proprietor, known to locals as Marie-Lou, also has seen little reason to modernise the brick-fronted tavern with lace curtains in the town of Isbergues near the Belgian border.

“It's been like this for 50 years,” Wirth said, wiping the same Art Deco countertop she did as a 14-year-old when she began working in the bar for her father back in 1931.

“They're all surprised there's no beer pump or coffee machine, but they don't remember the old days, because there wasn't a beer pump or a coffee machine,” says the sprightly centenarian, who keeps her grey hair close-cropped and wears no makeup, except for a hint of red lipstick. “If you have good beer you don't need a name,” says Wirth, who likewise has no use for the internet, a cellphone or credit card.

Never married and childless, Wirth took over the establishment when her father died in 1954 and she was 37.

Those were the days when customers ordered sweet wines like Byrrh and Dubonnet, as well as absinthe or pastis, the anise-flavoured spirit that is still broadly popular in France.

But the country has seen a sharp decline in bars since their heyday in the 1960s when they numbered around 600,000, a figure that has shrunk to fewer than 35,000 today.

Wirth recalls when Isbergues, which now has a population of around 10,000, was home to a steelworks with 6,000 workers. “Back then… there were a hundred bars,” she says without a trace of nostalgia.

Wirth opens the bar at 8:15 every morning, sipping a glass of cherry brandy with her first customer.

Hale and hearty, she calls herself a “little curiosity” who cannot explain her longevity. “How am I supposed to know why I'm like this? Only God knows but he doesn't speak to me!” The secret couldn't be in her diet, she says: “I eat a lot of spicy food… I eat everything I shouldn't. You give me mayonnaise or jam and I'll take the mayonnaise. But I don't have cholesterol!”

And Wirth takes risks that may seem ill-advised for a person of such an advanced age. Her best friend Marie-Claire Legrand confirms that she took up
the challenge of a treetop adventure course in the French Caribbean island of Martinique in 2013, and that the two of them have been up in a hot-air balloon.

“I'm a daredevil!” Wirth exclaims. “There's no point living to do nothing and see nothing.”

Regulars at Wirth's bar are becoming fewer — “I've buried a lot of them,” she says — but she vows to keep going as long as she can.