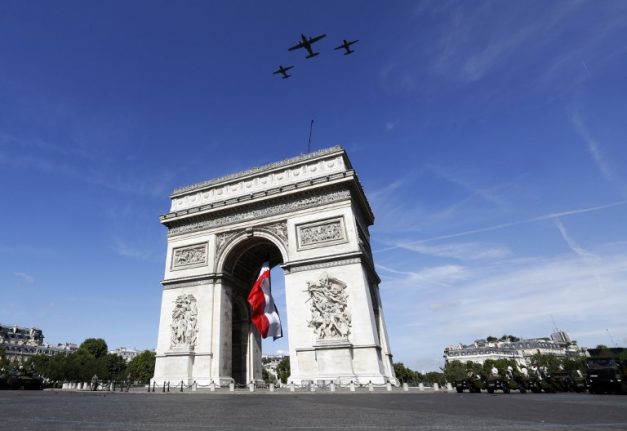 Fans will be able to throng the Champs Elysees to bid a final farewell to their hero as his cortege passes down the grand ceremonial avenue from the Arc de Triomphe, after the Elysée announced details of the homage on Thursday.

President Emmanuel Macron will later pay a “brief” tribute to singer at his funeral at the grandiose Madeleine church (pictured below) in the centre of the French capital.

“It has been agreed between the family, relatives of Johnny Hallyday and the Presidency of the Republic, that as part of this 'people's tribute', the funeral procession will leave the Arc de Triomphe, then head down the Champs Elysees until the Place de la Concorde before entering the Madeleine church for a religious service,” read a statement from the Elysée Palace.

Johnny Hallyday's musicians will accompany the cortege as it heads down Paris's most famous avenue. The announcement came as speculation mounted that the singer, known as the French Elvis, would be given a state funeral, an honour usually reserved for
France's greatest heroes.

But the French presidency stopped short of that, instead granting Hallyday, 74, who lost his long battle with lung cancer on Wednesday, a new kind of
ceremony it dubbed a “homage populaire” or “people's tribute”.

Paris transport bosses had earlier renamed a Metro station after Hallyday, whose death has plunged France into mourning. The RATP transport authority temporarily changed the name of the Duroc station near the Invalides where Napoleon is buried to “DuRock Johnny”.

It was also announced on Thursday that Hallyday would be buried on the French Caribbean island of Saint-Barthelemy, where he owned a house and would regularly spend time.

Adored by young and old, hard-living Hallyday was almost a national monument, selling more than 110 million records despite being almost unknown
outside the French-speaking world.

Television channels cleared their schedules to broadcast tribute shows to the star, who first came to fame in late 1950s yet managed to cleverly adapt
to changing musical styles.

Macron led the mourning by declaring that “there is something of Johnny in all of us”, promising that he and his wife Brigitte would attend the funeral.