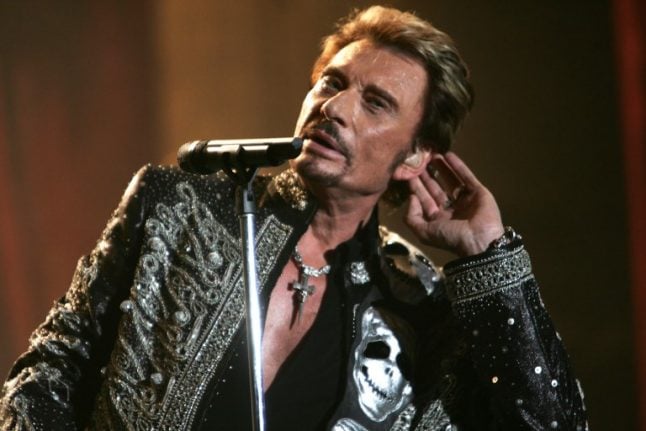 While he was never taken seriously abroad, Hallyday was by far the best-known rocker in France.

“There is something of Johnny in all of us,” said the French presidency ina statement after his wife Laeticia announced his death early on Wednesday.

Former president Nicolas Sarkozy — an adoring fan who once tried to tempt him back from tax exile in Switzerland — said he represented “part of our personal history… our memories and emotions”.

Known simply as Johnny, Hallyday sold more than 100 million albums and headlined 50 major tours, the last this summer when he teamed up with veteran French rockers for the “Old Scoundrels” tour. Inspired by Elvis Presley, he broke from France's classic “chanson” tradition in the late 1950s, rocking like his US idols and summoning the rebellious spirit of James Dean with his quiffed hair and leathers.

He drove his young fans wild, attracting 100,000 to a Paris square in 1963 and prompting scenes of hysteria until then unseen in a conservative France led by the stiff General Charles de Gaulle. Defying the view that France, then a land of crooners and jazz, could not rock, Hallyday had his big break with the 1960 hit “T'aimer Follement” (Makin' Love) and later belted out French versions of songs such as Jimi Hendrix's “Hey Joe”.

Even as the decades rolled by and politicians began to curry his favour, he kept his bad-boy image alive with a colourful private life, ticking off many rock 'n' roll rites of passage.

He attempted suicide in 1966, collapsed on stage in 1986 and married five times, twice to the same woman, the daughter of one of his oldest friends and songwriters.

In 1998 he admitted taking cocaine and suffering a difficult childhood with an alcoholic father who first abandoned the family when Johnny was just eight months old.

He settled down for a while with the actress Nathalie Baye, with whom he had a daughter, Laura Smet, who followed her mother onto the big screen. By then Hallyday had married model Laeticia Boudou, who was 31 years his junior, and adopted two Vietnamese children.

Born Jean-Philippe Leo Smet to a Belgian father and French mother in Paris on June 15, 1943, the singer was brought up by his aunt, an actress, and mentored by an American relative, Lee Halliday, from whom he took his stage name.

Often ridiculed by cartoonists and television comics as a man of little intellect, Hallyday had brief moments of kudos, including starring in films by directors Jean-Luc Godard and Patrice Leconte.

Further acclaim came in 2009 for his performance as a retired hitman out to avenge his murdered family in Johnnie To's thriller “Vengeance”. 'Not as dumb as you think'

Critics described him as “mesmerising”, with The New York Times saying that “with his ruined face and pale snake eyes Mr. Hallyday holds the screen”.

“I'm not nearly as dumb as people think,” Hallyday told AFP. “I think this vision of me belongs to the past.”

And there was no doubting his cross-generational popularity, a phenomenon foreigners often found bewildering.

“There is in the very deep public affection for Johnny, something that goes beyond the sexes and social classes,” his friend the singer Jean-Jacques Goldman told AFP.

He was made a knight of the French Legion d'Honneur in 1998 by president Jacques Chirac, who called him “the idol of the young”. “Johnny Hallyday is a real star who has successfully merged two cultures, the French and the American,” Chirac said.

But a few years later Johnny went into tax exile in Switzerland and Los Angeles — where he was often photographed on his Harley Davidson motorcycle — claiming that French taxes were too high.

Yet fame outside the French-speaking world eluded him.

“He's a rock icon in France,” Kaganski said. “But for the English or the Americans, it'd be like the English trying to sell us camembert (cheese).”

“My international career? It'll happen if it happens,” Hallyday once told AFP. “But I don't specially want to succeed elsewhere. It's better to be king in one's own country than a prince elsewhere.”