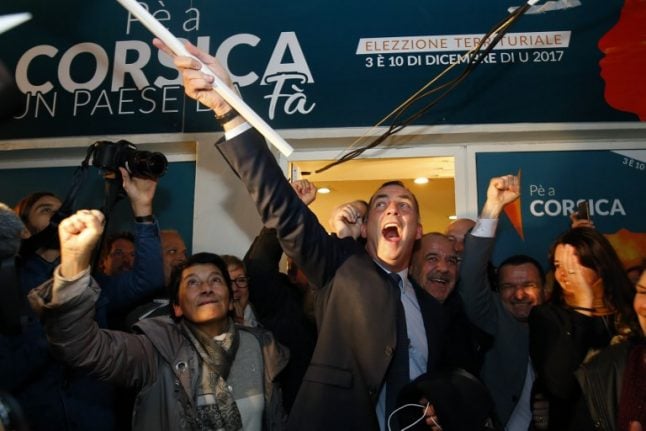 The governing Pe a Corsica (For Corsica) alliance, which groups the pro-autonomy Femu a Corsica (Let's Make Corsica) and pro-independence Corsica Libera (Free Corsica), won 45.36 percent of the vote in Sunday's election to the regional assembly.

Local rightwing party La Voie de l'Avenir (Future Path) came second with 14.97 percent, ahead of France's main opposition conservative Republicans in third with 12.77 percent.
President Emmanuel Macron's centrist Republic on the Move (LREM), which has failed to make inroads on the Mediterranean island of 330,000 people, trailed in fourth with 11.26 percent.
The result puts the nationalists on course for a thumping victory in the second and final round of voting on December 10, two years after their breakthrough win in regional elections. Candidate for the Pe a Corsica nationalist party Jean Guy Talamoni. Photo: AFP
“I think that today Corsica is sending a very strong signal to Paris and that a large majority is saying: we want peace, we want democracy, we want to build an emancipated island,” Femu a Corsica's leader Gilles Simeoni declared, calling it “a democratic tidal wave”.
The leader of Corsica Libera, Jean-Guy Talamoni, said that the result surpassed the nationalists' own expectations and showed that “for Corsicans, Corsica is a nation”.
Autonomy, not independence
Both men however ruled out an imminent bid for independence.
“The question of independence is not on the cards today,” Simeoni, whose party is dominant in the alliance, told France's Europe 1 radio. “We want autonomous status,” he added.
Talamoni, who has been nicknamed Corsica's Puigdemont after Catalonia's separatist leader Carles Puigdemont, said the question of independence would only come up “in 10 or 15 years.”
“If a majority of Corsicans want (independence), in 10 or 15 years, nobody will be able to oppose it,” he told France Inter radio. Candidate for the Pe a Corsica nationalist party Gilles Simeoni. Photo: AFP
Corsica, a mountainous island with its own language and special administrative status, has had an at times troubled relationship with the wealthier mainland.
The separatist National Liberation Front of Corsica (FLNC) waged a nearly four-decade bombing campaign targeting mainly state infrastructure before announcing a ceasefire in 2014.
The worst nationalist attack claimed the life of France's top official on the island, Claude Erignac, who was assassinated in 1998.
The situation has stabilised over the past decade.
In June 2014, the FLNC announced a permanent ceasefire, in favour of a political process.