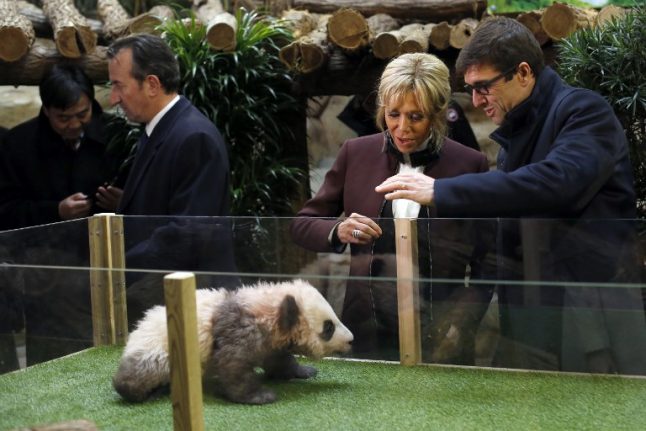 The male cub was the first ever born in France where its mother has been on loan from China since 2012, as part of Beijing's “panda diplomacy” efforts.

The 64-year-old French first lady cooed over the infant bear at Beauval Zoo and then watched as China's junior foreign minister unveiled his name as Yuan Meng, which means “making a dream come true” in Chinese.

President Emmanuel Macron's wife has kept out of the spotlight since his victory in May, assisting with major state visits and foreign trips but avoiding speaking engagements or interviews. Faced with a hostile online petition and damaging headlines, Macron dropped plans in August to create an official First Lady status for Brigitte which would have given her a formal legal role.

Making her first speech on Monday, Brigitte said France had been “proud and happy” to host the pandas from China and that the cub was a symbol of the historic ties between the countries.

“Through him, we have a responsibility to work on building Franco-Chinese friendship,” Brigitte said in a message addressed to her Chinese counterpart and fellow “godmother” Peng Liyuan, who was meant to attend the ceremony but was absent. Panda reproduction, in captivity or in the wild, is notoriously difficult because the female panda is only in heat once a year for about 48 hours.

But the number of pandas worldwide has rebounded since the black-and-white bear was declared an endangered animal in the 1980s, thanks to efforts to protect it and its habitat.

China has dispatched its national treasure to only about a dozen countries, using the animal as a symbol of close relation.

A female and male mate arrived in Beauval in 2012 after high-level negotiations between Paris and Beijing, but Yuan Meng was born through artificial insemination. Monday's ceremony was carried live on French rolling news channels, reflecting the high level of interest in both Brigitte Macron and her “godbear”.

The Macrons met at a Catholic school in their hometown of Amiens in northeast France, where Emmanuel was a pupil and Brigitte a married mother of three who ran the school's drama club.