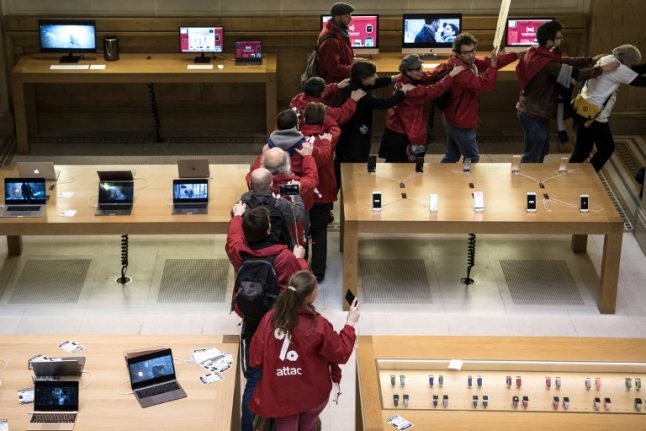 Activists stage a protest against alleged tax evasion by US multinational technology company Apple at an Apple store in Paris on Saturday. PHOTO: CHRISTOPHE ARCHAMBAULT / AFP
The members from Attac, a group that seeks alternatives to unbridled globalisation, invaded the expansive two-level store near the Paris Opera for several hours — leaving only after they were assured of a meeting with management.
“One hundred Attac activists occupied the Apple store” to demand the company “pay its fair share of taxes in the country in which it really operates,” spokeswoman Aurelie Trouve said.
Members standing on the second-level balcony held a banner reading “We will stop when Apple pays”, while others held signs that read “Pay your taxes”.
“We received a formal commitment from an Apple manager that we would be granted a meeting with national leadership within 15 days,” Trouve told AFP. “If this meeting does not take place, we will come back before Christmas.”
The group held about 30 demonstrations across France on Saturday, including at an Apple store in the southern city of Marseille. Apple France was not immediately available for comment.
In August 2016, European authorities estimated that the company behind the iPhone owed $14.5 billion in back taxes after it negotiated highly favourable tax arrangements with the Irish government.
Revelations last month from the “Paradise Papers” shed light on Apple's tax avoidance strategy, which shifted tens of billion of dollars in profits from one fiscal haven to another.
The report — from a trove of documents released by the US-based International Consortium of Investigative Journalists (ICIJ) — said Apple transferred funds to the small island of Jersey, which typically does not tax corporate income and is largely exempt from European Union tax regulations.
Apple has said it follows the law in each country it operates.
Attac also protested against the company last month on the day Apple released its iPhone X globally, dumping a load of freshly picked apples as demonstrators carried signs saying “Apple, pay your taxes” in the southern city of Aix-en-Provence.