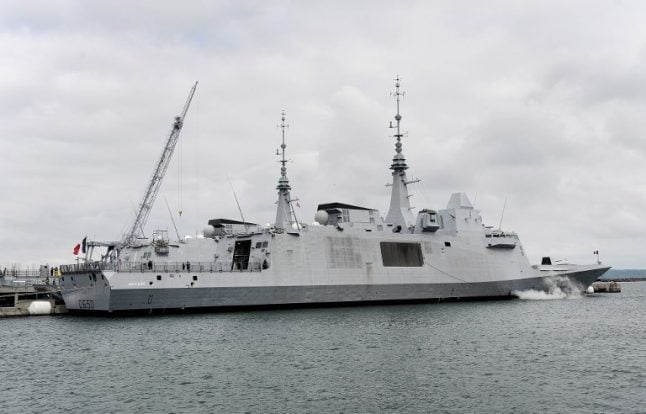 The ships would be built based on the Frimm frigate design, pictured here. Photo: FRED TANNEAU / AFP
Naval Group and Fincatieri proposed building the new ships based on their Fremm frigate design, which is already in use by both the French and Italian navies.
“Should the offer be accepted, the future frigates would be built in Canada at Irving Shipbuilding (in Halifax) in a very short time,” the two companies said in a joint statement.
The consortium also pledged to add Canadian suppliers to their global supply chains, as both Australia and the United States evaluate the ship design to outfit their respective navies with modern frigates.
According to the daily National Post, the consortium has guaranteed the cost of building the ships for Canada at no more than Can$30 billion (US$24 billion, €20 billion). After repeated delays and rising costs, Canada settled on a budget of Can$60 billion (US$48 billion, €40 billion) for the ships, while construction is scheduled to begin in the early 2020s.
The National Post said Canadian officials favor Lockheed Martin and the British firm BAE's proposal to build Type 26 frigates that BAE is making for the Royal Navy. But the government, it added, would be hard pressed to ignore the huge savings offered by the Naval Group-Fincatieri bid.