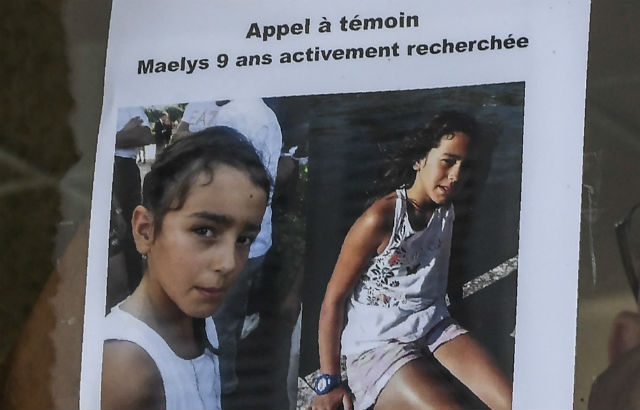 THe Missing 9-year-old Maelys.
Maëlys de Araujo was reported missing in the early hours of August 27th while she was attending a wedding with her parents in the village of Pont-de-Beauvoisin, near the town of Chambery in France's tranquil Isere region of mountains, woods and lakes.
Despite an exhaustive search and hundreds of interviews, police have failed to find any trace of her. On Thursday police renewed their search in the hope of unearthing a clue that would unlock the mystery of her disappearance and give her distraught parents an answer at last.
French investigators are certain the key to solving the mystery lies with 34-year-old local man Nordahl Lelandais, who had attended the wedding.

A week after her disappearance Lelandais was charged with “kidnapping, illegal confinement or arbitrary detention of a minor of less than 15 years”.
On Thursday, after being questioned again by judges, he was charged with the murder of Maëlys.
He has categorically denied all involvement and has frustrated prosecutors who point to the stack of evidence against him. It's not only his denials that have angered prosecutors and the parents of Maëlys but the manner in which he has responded to questioning.
He answered “calmly, and kept his cool,” Grenoble prosecutor Jean-Yves Coquillat (pictured below) told a news conference on Thursday. A statement from the prosecutor in Grenoble shortly after he was charged read: “Brought before investigating judges at the end of the afternoon, he contested the facts. Confronted with testimony, findings and scientific evidence, he persisted in his denials and explanations.”
Lelandais has had an answer to pretty much everything investigators have thrown at him, much to the distress of the distraught girl's parents who are demanding he confess and let them know where their daughter is.
For a start the girl's DNA was found in the car of the suspect, a former military dog trainer. Lelandais has admitted that Maelys briefly got into his car with another child, apparently to see if his dogs were there, but he claims she later returned to the wedding party.
The latest damning piece of evidence against him involved two CCTV pictures of a car, which investigators say show him leaving the wedding venue shortly before Maëlys was reported missing.
Prosecutor Coquillat said enhanced video footage showed a “small, frail form in a white dress” in the passenger seat of Lelandais's car as he drove away from the wedding in the early hours of August 27, which was not present in footage of his return to the party.
Maëlys was wearing a white party dress when she disappeared from the wedding.
Lelandais however has seemingly taken advantage of the fact the CCTV pics do not show the registration plate of his car, to deny that the vehicle was his. But prosecutors point to stickers on the car as proof it was his.
On the night of the wedding, around the time Lelandais was captured driving away from the venue and one minute after Maëlys was last seen, he put his mobile phone in airport mode.
The phone remained offline for 39 minutes, which prosecutors believe was the time he killed the little girl. They believe he turned the phone onto airplane mode to mask his tracks. It was only placed back online once he had returned to the wedding venue. His answer to prosecutors was that he wanted to save battery.
Prosecutors' suspicions were also raised by the fact Lelandais took his car to a garage the day after initially being questioned about the disappearance and gave it a thorough clean with industrial products.
As a former dog handler police believe he knew he the products he could use to throw police dogs off the scent of the little girl. Lelandais however insisted he cleaned the car because he had agreed to sell it. One alibi which apparently has stood up.
Lelandais's father however insists his son is innocent. “It just can't be Nordahl,” he said. He's a kind boy who loves children. I'm convinced he is innocent.”
While Lelandais continues to deny all accusations, despair grows for the parents (pictured below). Police meanwhile are desperate to find her body, believing it will hold the clue to cracking the investigation. It's a scenario the parents can't face. But for prosecutors it's the most likely scenario.
“Unfortunately the most likely hypothesis is that the girl was kidnapped,” said Grenoble's prosecutor. [Between 2.45am and 3.24am] is the period when he murder took place. After that there is the period when the body was disposed of. This affair will never be completely resolved until we find the child. But it's not certain we will.”