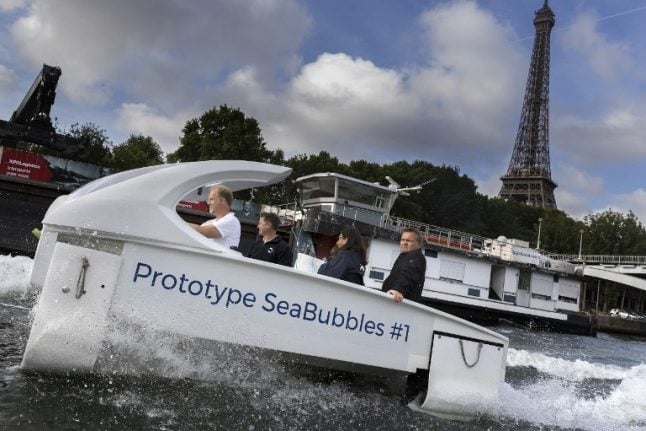 Photo: AFP
In October it looked like prospect of water taxis on the Seine in Paris had well and truly been torpedoed with the creator blaming red tape put up by the city's Port Authority who had refused to bend the rules on the river's speed limits.
But luckily for Parisians, the SeaBubbles' creators and the French capital's independent port authority have finally come to an agreement over the speed at which the vehicles would be able to travel if the project goes ahead.
That means that the water taxi tests, which had been due to take place at the end of October before they were blocked, are now free to go ahead in 2018.
A “reasonable agreement to experiment with a flight speed of 30km/h was accepted,” creator, French yachtsman Alain Thébault told AFP on Wednesday.
The maximum speed allowed on the River Seine is usually 18km per hour as long as the boat is more than 20 metres away from the river banks and weighs less than 20 tonnes but Thébault said in October that these limits should not apply to the Bubbles.
READ ALSO:
“The speed regulations are made to avoid big boats creating too many big waves that damage the banks, but that rule is obsolete for the SeaBubbles, which practically don't make any waves at all,” he said.
When the SeaBubbles were successfully tested on the Seine back in June Paris looked like it was on course to become the first city in the world to use the SeaBubbles as a mode of transport.
But in light of the push back from the port authority, the creators announced that they would instead launch the flying water taxis in Switzerland, where five of the flying water taxis will be launched on Lake Geneva in April.

This was bad news for Paris Mayor Anne Hidalgo who had been keen to welcome the electric boat taxis to Paris and had even taken part in a test ride. Photo: AFP
But with the issues seemingly resolved, Thébault estimates that five to ten of the Bubbles, which can fit five people, essentially four passengers and a pilot, could take to the River Seine within a few months.
Mayor Hidalgo was thrilled to announce that the plan was back on after negotiations to “lift the breaks that blocked the experiment”.

What are SeaBubbles?
The “Sea Bubble” – “a bubble with four wings” – is powered by two small electric motors. It is powered by solar energy through panels on the vehicle.
It floats 70 centimetres above the river, only making contact with the water via its four “marine wings”, or foils, which reduces the resistance by 30 to 40 percent compared to a boat of a similar size.
And the machines are something the Frenchman has been working on for the last 25 years, he writes on his website, starting with building wooden models and more recently breaking sailing speed records.
The vehicle is designed like a Fiat 500, he says, with the same technology but different propulsion. The wings under the boat essentially lift it off the water, reducing the drag significantly.