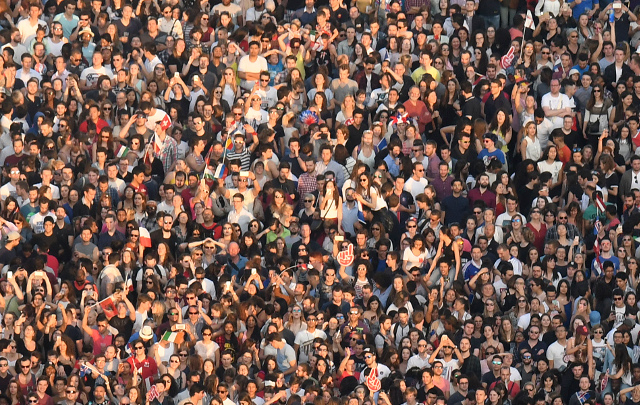 Photo: AFP
France’s National Institute for Statistics and Economic Studies (INSEE) has released its 2017 “social portrait” of the country which sheds a little light on life in modern France, how it has evolved and how it compares to life in other countries.
We've picked out a few stats that tell the story.
High standard of living
People tend to have a higher standard of living in France compared to their European neighbours, according to France's national statistics agency, INSEE.
Working out standard of living according to people's salaries, other household income including social benefits and the number of people in the home, a report by INSEE revealed that the average annual standard of living stood at €24,982 in France in 2014.
This compared to €18,500 at the European level, putting France ahead of Germany and in line with the United Kingdom.
Poverty on the rise
Since the 2008 financial crisis, France's poverty rate has been on the rise, according to a report by INSEE.
Calculating the poverty rate according to households whose standard of living is below 60 percent of the median standard of living, INSEE revealed that the amount of poverty in France increased from 13 percent to 14.2 percent in 2015. Photo: AFP
This reflected an increase of 900,000 in the number of people living below the poverty line, from 7.83 million to 8.87 million.
However compared to the rest of Europe, France's poverty rate is below the average of 17 percent.
Inequality stable
Salaries at the top of the employment ladder increased considerably between 1988 and 2014, something which has already been seen in the US and UK, according to national statistics agency Insee.
But unlike in those countries, the gap between rich and poor in France has not grown accordingly.
“In France, wage inequality has remained stable or has decreased slightly in recent decades,” said a study by INSEE.
This can be explained, in part, by an increase in the number of skilled workers as well as higher levels of qualification among employees.
On top of which, the minimum wage, called the SMIC in France, “tends to compress the wage distribution, which may limit the polarization of wage employment,” the report said.
Rising population
By the year 2050 France will be home to millions more people.
On January 1st 2017, France had a population of 66.9 million, an all-time high and this is expected to rise to 74 million by 2050, according to INSEE. Photo: AFP
Average salary rises
The average salary for a full time worker employed in the private sector stands at €2,230 per month (net, meaning after social charges have been paid, but not income tax), which represents a slight rise of 0.5 percent after four years where the average salary roughly remained stable.
High life expectancy
A recent study by the OECD (Organisation for Economic Co-operation and Development) revealed that French people born today can expect to live to 82.4 years.
In the study which compared people's health across 35 developed nations, France beat the average life expectancy of 80.6 years.
Although it also noted that these years may not be spent in the best health, with the French experiencing a higher than average level of dementia. Photo: Flickr
Highest amount spent on welfare in the EU
France is known for having a generous welfare system and now here's the proof.
In 2014, France spent more on welfare — 34.3 percent of its gross domestic product (GDP) — than any other country in the EU, according to INSEE.
In Denmark, Finland, the Netherlands, Belgium and Austria spending on welfare also exceeded 30 percent, while in countries like Poland and Ireland, social spending was much lower.
The average spending on welfare in the European Union was 28.7 percent.
Low graduate employability
France might have a higher percentage of higher education graduates than the European average (43.6% compared to 39.1%) but they're lagging behind when it comes to employability.
France comes 24th when ranked alongside other EU countries on graduate employability, with an employment rate of 71.7 percent. Photo: AFP
“The EU aims, in 2020, to have an employment rate of 82 percent among graduates of higher or secondary education within three years of graduating,” said INSEE.
In 2016, several countries already reached the target, including Germany and the Netherlands where this rate already exceeds 90 percent.
Salaries higher in public sector than private
Private sector employees in France earn eight percent less than their public sector counterparts.
Civil servants earn an average income of €1,826 compared to workers in the private sector who receive an average salary of €1,673 euros per month.
However this is partly down to the fact that part-time work is far more common in the private sector which skews the statistics.
In terms of full-time equivalent salaries, the average salary for the private sector is higher, at €2,266 compared to €2,229 in the public sector.
Birth rate on the wane
France has long been known for having one of the highest birth rates in Europe, but 2016 marked its second consecutive year of decreasing birth rate after eight years of relative stability.
A key finding from INSEE showed that birth rates in France have dropped in 2016 to just 1.93 children per woman. Photo: Evan Amos/ Wikimedia
You're better off being married…
…at least in terms of your financial situation.
The standard of living for French people living in a common-law union is 14 percent lower than that of married couples, according to INSEE.
In fact, the average standard of living for common-law couples was €1,875 euros per month in 2015 compared to €2,200 for married people.
1.3 million homes in France without heating
According to INSEE, in 2013 an astounding one in 20 homes in France did not have central or electric heating.
This figure represents 1.3 million homes across the country.
Not surprisingly, nearly one in five French people (18.7 percent) reported having suffered from the cold weather round the clock last winter, according to BFM TV.