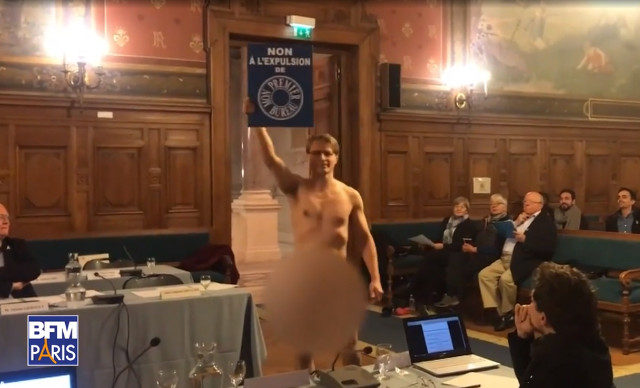 Photo: Screenshot/BFM TV
The latest in a long line of nude protest stunts in France was carried out by Benoit Delol at a council meeting in the 14th arrondissement of Paris on Monday night.
Delol's surprise act, which appeared organised rather than spontaneous and was supported by a few accomplices according to reports, was carried out to defend his organisation “Mon Premier Bureau”.

Delol stripped off and paraded in front of those gathered while holding a sign which said, “No to the eviction of 'Mon Premier Bureau'” — his co-working space company.
The stunt was carried out to protest the fact that his company's lease at the “Grands Voisins” building in Paris is coming to an end.
The site, which currently hosts 20 young companies and artisans who only have to pay €99 for a month's rent, is due to be repurposed, partly to provide new homes.
District councillor for the 14th arrondissement Audrey Livé said: “I understand this approach” by the director of an organisation “who is not being listened to”.
Delol isn't the first Frenchman to strip off to make a point. In fact, there's a history of it in France.
For example in 2015, a group of councillors from a small French town bared all in an attempt to slow traffic.
And according to French sociologist Francine Barthe, who is the author of “The Geography of Nudity – Getting naked somewhere” the urge of protesters to take off clothes is rooted not in the sexual liberation of the 70s or the naturist movement, but the anarchists of the late 19th century who believed that getting naked was an act of rebellion against the state.
Although the tradition seems to live on partly because of the media attention given to naked protesters as opposed to clothed ones – see every stunt by the self-dubbed “sextremists” Femen.
“There's nothing better than an arse or two to attract media attention,” as one militant from animal rights group Peta told France's Slate magazine.
“If it works, then why not. The naked girls have a higher impact on men than a cool Panda,” said another eco-activist.”
READ ALSO: