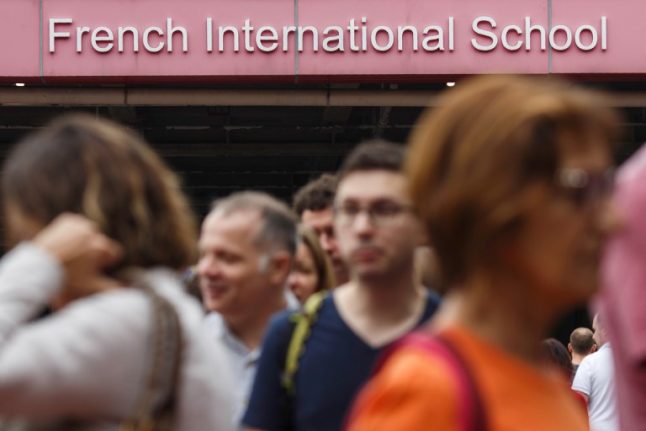 File photo: French International School in Hong Kong/AFP
Paris has 492 schools in 137 foreign countries, catering to some 350,000 students including the children of elite business leaders and diplomats.
Teachers' unions are angry at government plans to slash 33 million euros ($39 million) from the network's annual budget as President Emmanuel Macron seeks to trim the deficit.
AFP correspondents reported strikes at schools from Beijing and New Delhi to Vienna, Athens, Nairobi and Tokyo.
Others were unaffected, including Lagos — where teachers said they had been unaware of the coordinated strike action — and Hong Kong, where most teachers are hired locally rather than on expat contracts.
Franck Pajot, a teacher in Beijing, said he and his colleagues feel “abandoned”.
“France's network of high schools abroad is 'excellence a la francaise',” he added, arguing that the cash was needed to maintain their international reputation. Macron sings with children at the Lycee Francais International Georges Pompidou in Dubai. Photo: AFP
Participation varied around the world, with more than three quarters of teachers downing their chalk in Beijing, 80 percent in Athens, and a third in Nairobi, according to staff and unions.
Unions have blasted the cutbacks as “drastic”,  representing nearly 10 percent of the current budget, and would result in 500 teachers' jobs being axed over three years.
Counting 60 percent of their students as foreign, international schools are seen as a key means by which France exports its language and culture.
Fees are often steep, and the worldwide network makes France's “lycees” or high schools a favoured choice among high-flying international parents who frequently move around.
France's Foreign Education Agency (AEFE), which runs the schools, refused to say how many teachers globally were taking part in the strike.
It said it was “doing its part” for government cost-cutting efforts and stressed that job cuts would not affect those already hired.
The schools are “a public service to our compatriots abroad, and a valuable tool of influence for our country”, the AEFE added.
Foreign Minister Jean-Yves Le Drian has guaranteed the agency's loans in 2018, while Macron has promised the credit will continue in 2019, the agency said.