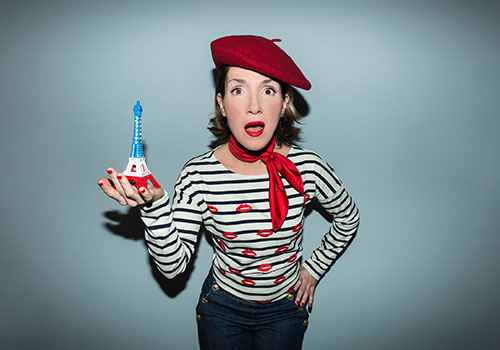 Photo: Julie Collas
Julie Collas, 41, knows Paris well.
She began her career as a lawyer and spent many years working in the finance district of La Defense, a place she calls “a gulag for Parisians with too many diplomas.” But she gave up her career in 2015 to become a comedian and now is the star of her one-woman show called “Oh my god she's Parisian” in which she takes a comic look at the way Parisians live and confirms and dispels a few myths about the most-talked about inhabitants of any city on earth.
So she's definitely qualified to answer a few questions on whether the clichés foreigners have of Paris are more myth or reality. Paris isn't kid-friendly
REAL: Well we like them but we just don't want to see them in bars or restaurants. We just want them to be locked in schools all day. Paris is not really a kid-friendly city. I mean there are no kids' chairs in restaurants in Paris, but you find them everywhere else in Europe.
I think one reason kids are not welcome in restaurants is that they take a lot of space, so you feel bad bringing them into these tightly packed spaces.
Dog poo on the streets is a real problem
REAL: It's as bad as the reputation. If you live in Paris, you know how bad it is. I ask people in the audience 'Why do you have dogs in Paris?' — it's even worse than having kids. You have to take them out for a walk every night but they should take them to the toilet. That's what I do with my kids.
You know where you get the most dog poo? Outside schools. People don't care here. They just think “I pay my taxes, the City Hall will make sure it's cleaned up”. They don't take responsibility for their own actions.
Waiters are rude
Myth and reality: It depends where you go in Paris. If you go to some of the new trendy cafes people are nice but if you go to the real tourist areas the staff can be so rude.
READ ALSO: The French are not rude, it's just one big misunderstanding Parisians don't like speaking to tourists
Myth and reality: We do hate to give directions to tourists but it's often due to the fact we don't like speaking English, not because we are rude. Parisians can be quite shy about speaking English but we shouldn't be because everyone loves our accent.
But in our defense there are just so many tourists in Paris, so maybe we can't blame Parisians for feeling fed up sometimes.
READ ALSO: Crossing roads is dangerous
REAL: I don't let my kids cross the road by themselves. Even if the lights have gone red and there is the green man you have to wait two seconds before you cross, because you know there are cars going to come through those red lights. I think 80 percent of people who are knocked down at zebra crossings are old people, because they always start to cross as soon as the man turns green.
The Metro is a bit of a nightmare
Part reality: As part of the show I mime a guy masturbating against a lady on the Metro. There are dodgy guys. If someone is rubbing up against you, you have to say something. That should not happen.
But it's not just dodgy guys, sometimes you can't even get on, sometimes you have to wait for several trains to pass. I would say never take the Metro between 8am and 9am. Just take a bike. And don't expect someone to give you their seat if you are pregnant.
Parisian women are slim
REAL: Everyone always talks about Parisians being so slim. It's because we eat small portions and we don't eat croissants for breakfast everyday. We also don't snack in between meals and we have to walk a lot in Paris, which might explain why we are so thin. We also don't have a big glass of milk before we go to bed. If you see overweight people in Paris, they'll likely be from outside Paris or tourists.
Drivers in Paris are generally crazy
REAL: It's horrible, really bad. It's like they are constantly having a nervous breakdown at the wheel. People don't even want to let you park. They start beeping at you if you block the road. Then they don't even care if they bump into other people's cars.
Dinner parties are serous business
REAL: You'll normally have around eight people around a table at a dinner party and we'll talk about anything from sex to politics and they will go on until 1 or 2am. Yes they are serious business.
Finally is it true we shouldn't eat the peanuts they give you in bars?
“Yes, don't eat them. They have about 45 different germs on them and urine. People go to the toilet and then put their hands in the peanut bowl. So don't eat them.”
Julie Collas plays at the BO theatre on Boulevard Saint-Martin every Friday and Saturday night.
“Discover everything you ever wanted to know about Parisians and the « Parisienne » with Julie, a real Parisian girl and her charming French accent in a show which is easy to understand for non-native speakers. From breakfast to a crazy night out, Parisians will no longer have any secrets from you. After the show, you will be able to say that you know everything about the way Parisians live!”