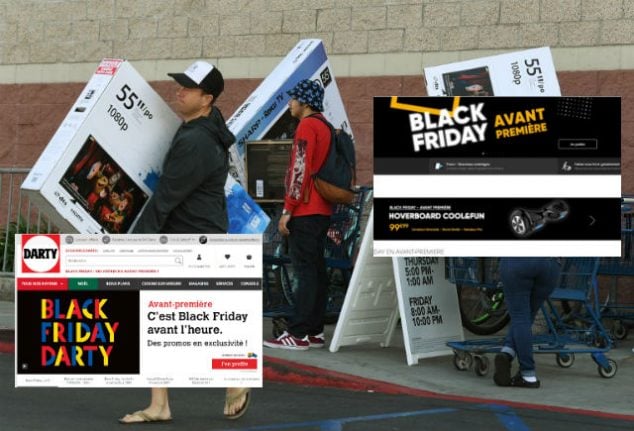 French shoppers will spend around €845 million online and €4.5 billion in shops this weekend, according to the study.

The reason for so much cash being splashed around is Black Friday, the shopping phenomenon imported from the US, which sees stores offer massive discounts to shoppers the day after Thanksgiving Thursday, which is on November 23rd.

Black Friday was launched in France five years ago but took a while to take off with many French consumers, who are used to the traditional January and summer sales periods, left a little confused by the offers of huge discounts in late November.

“C'est Quoi Black Friday?” (What's Black Friday?) has been the headline of many newspaper articles each November which try to explain the event to the French public.

But in 2017 it looks to have well and truly taken off and since then has become a feature in the French consumer calendar alongside the traditional January and Summer sales, albeit after a slow start.

A quick look at the website of any big French retail store like Darty or FNAC reveals that Black Friday or the “Big Weekend” (because it's more than just one day now) is certainly now an event in France. In fact it's almost a “Black Week” given the discounts are already being offered as an “avant premiere”. According to a report by the Centre for Retail Research, online spending in France this Black Friday will be up 15 percent on last year and up four percent in shops. “We are going to offer a selection of 20,000 premium items with the promotions renewed every five minutes,” Frederic Duval, the director general of Amazon France told AFP.

Emmanuel Grenier president of Cdiscount stressed how important Black Friday or the Big Weekend was to retail firms.

“It's just about marketing. This week will be our best takings for the whole year,” he said.

General manager of the group LDLC (high-tech products), Olivier de la Clergerie, said: “The success [of Black Friday] is dazzling, we can no longer ignore it.” French shopping culture – always more subdued than in the more consumerist “Anglo-Saxon” countries – is framed by the two sales periods authorized by the law – summer and January.

The main rules shops have to stick to on Black Friday is that the are not allowed to make loss-making sales, usually through crazy discounts of up to 90 percent. That is basically the same rule they have to stick to outside the two designated sales periods.

And companies in France are also less likely anyway to offer the kind of crazy discounts that have prompted riots in the US in the past.

But Black Friday hasn't gone down well with everyone in France.

Emery Jacquillat, the CEO of Camif, which sells home furniture online has called for a boycott and will lead the way himself by “closing” his website on Friday.