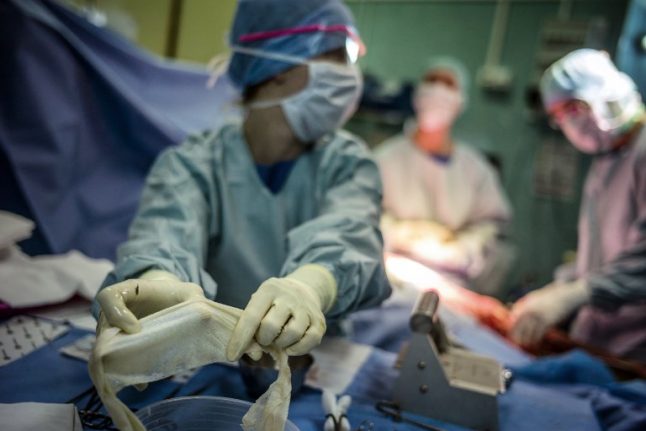 File photo: Surgeon prepares skin transplant. AFP
Consumed by flames while handling chemicals on the job, 33-year-old man Franck Dufourmantelle received life-saving grafts from his brother Eric's skull, back and thighs.
“I had a fresco-like tattoo on my arm,” he recalled in a phone interview with AFP.
“But the only thing left is the word 'life',” in English, he said.

Transplants from a genetically identical twin eliminates the risk that the recipient's body will reject the donated skin or organ.
Dufourmantelle's accident occurred in September 2016 in northern France.
He underwent about a dozen operations, followed by months of hospitalisation and physical rehabilitation.
Doctors had not publically discussed the case until now.

Dufourmantelle is today living at home with his partner, and is still receiving intensive therapy.
“It doesn't hurt any more,” he said, noting that he had recently stopped taking painkillers.
He is able to walk again, and is still recovering the use of his hands.
With the left hand, “I can pinch things, like with a claw,” he said. His right hand — less damaged — has healed to the point where he can write with a pen.
Miraculously, his face was mostly spared.
Nearly half of his brother Eric's skin was removed, and then stretched in a machine so that it would cover a larger area, according to the chief surgeon.
'Get on the floor!'
The donor is today not “covered in scars,” Maurice Mimoun, a doctor at the Saint-Louis Hospital in Paris, told AFP.
“All one can see is a slight difference in the pigmentation.”
In most burn cases, the skin of a deceased and unrelated donor is grafted onto the victim, even if doctors know that it will be rejected within a couple of weeks.
That is usually enough time for new skin to start growing, or to be harvested from elsewhere on the patient's body.
Twin-on-twin skin transplants have been done before, but never over such a large area, said Mimoun.
“It is the first time that such a skin graft has been done between twins for 95 percent of the body,” he told AFP.
The previous record was a case where about 68 percent of the victim's body was burned.
Dufourmantelle said his memory of the accident is patchy.
“I remember people shouting 'Get on the floor! Get on the floor!', but I just stared running,” he said.
“When you're on fire, it's hard to think straight.”
Lying on the ground helps smoother the flames, and allows others to cover the victim with whatever is available — jackets, blankets — to do the same.
During surgery, the two brothers were operated on at the same time by separate teams of surgeons and anaesthesiologists to reduce the time between removal of the donor's skin and its transfer, Mimoun said.
It was also essential to remove burned skin, which is toxic.
Our epidermis is tough and water-resistant, and protects the body from dehydration, injury and infection.
Url copied to clipboard!