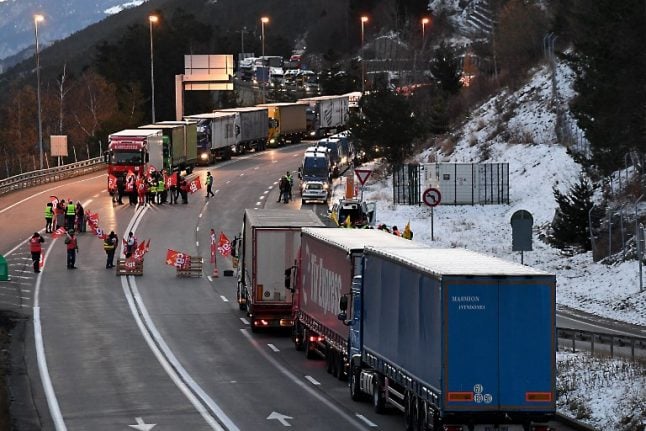 Drivers began blocking the Frejus tunnel in Modane, eastern France, before dawn, at one point leaving more than 200 heavy goods trucks waiting to cross into Italy.

At Rekkem on the Belgian border there were up to 10 kilometres (six miles) of tailbacks, though officials said the traffic jams had cleared by
mid-morning.

Pascal Goument of the CFTC union said the protest was “a warning for Europe”.

Five truckers' unions wrote to President Emmanuel Macron on Tuesday demanding a meeting, blasting the “disastrous consequences” of their industry
being excluded from renegotiated EU regulations.

Macron has been pushing for a revamp of the Posted Workers Directive, which allows workers from lower-wage countries such as Poland to work temporarily in richer EU nations.

Their taxes and social charges are paid at home — often making them cheaper to hire in western Europe than their domestic competitors.

France, which saw a 24-percent hike in posted workers to more than 354,000 last year, has complained that the rules create an unlevel playing field.

Macron reached a compromise with his EU peers in October under which workers can only be posted abroad for 12 months — but with a key concession allowing for a six-month extension at the company's request.

France was also forced to accept that these changes exclude the road transport sector as countries including Poland, Hungary and Spain said the reforms could hurt their drivers. 'Slaves on the road'

Under the current deal, foreign drivers must earn the minimum wage but may not receive other benefits enjoyed by local rivals, such as paid meals or lodging.

“We don't want drivers to be slaves on the road,” Antoine Fatiga of the CGT union told AFP in Modane.

He added: “When they come to work here for two times less than us, we struggle to keep our work.”

Protesting truckers also erected barriers at Strasbourg on the German border, while on the Luxembourg border truckers drove deliberately slowly to snarl traffic.

The Posted Workers Directive, first introduced in 1996, has caused resentment in western countries such as France, Germany and Austria, which argue it amounts to “social dumping”.

But there has been staunch resistance to changing the rules in eastern and central Europe, with Poland benefiting the most.