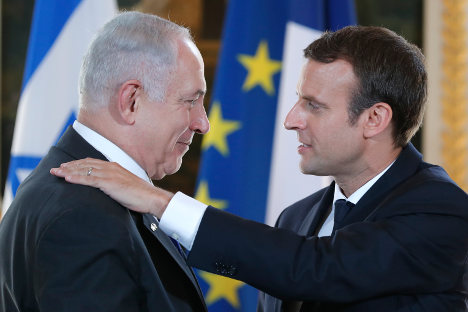 In a phone call on Sunday, “President Macron updated Prime Minister Netanyahu with the measures he is taking in the crisis in Lebanon,” it said in a Hebrew-language statement.

“The two leaders decided to speak again in the coming days and to meet in Paris at the beginning of next month.”

On November 4th, Lebanese Prime Minister Saad Hariri announced his shock resignation while in Saudi Arabia, citing Iran's “grip” on his country and threats to his life.

In a speech broadcast by the Al-Arabiya news network, he accused Tehran of “creating a state within the state” and blasted its Lebanese Shiite ally Hezbollah.

He said Hezbollah was “Iran's arm not just in Lebanon but in other Arab countries too”.

Iran rejected what it said were “unfounded accusations”.

On Sunday, Netanyahu and Macron also spoke about the nuclear deal with Iran, its “attempts to set up bases in Syria and its activities in the region”, the statement said.

The French president has also telephoned his counterparts in the United States and Egypt, Donald Trump and Abdel Fattah al-Sisi, as well as Saudi Crown Prince Mohammed Bin Salman and UN Secretary-General Antonio Guterres to discuss “the situation in the Middle East”.

Hariri flew from Riyadh to Paris on Friday for talks with Macron, who is attempting to help broker a solution to a political crisis that has raised fears over Lebanon's fragile democracy.

France, which held mandate power over Lebanon for the first half of the 20th century, plans to bring together international support for Lebanon, depending on how the situation develops.

Netanyahu has described Harari's resignation and his comments on Hezbollah as an “alarm call” to the world about Iran's ambitions.

Israel, which shares a border with Lebanon, accuses Hezbollah of having long held the reins of power in Lebanon and of seeking to strengthen its role in neighbouring Syria, where it is allied to President Bashar al-Assad in the country's civil war.