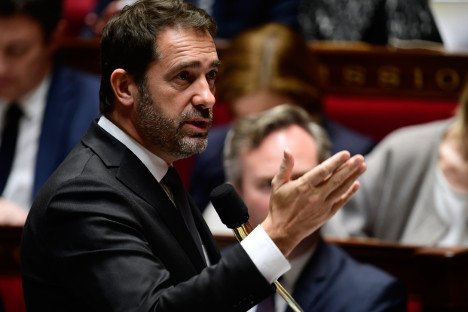 Christophe Castaner is now leader of Republic on the Move. Photo: Martin Bureau/AFP

Christophe Castaner, a smooth-talking, ultra-loyal government spokesman, takes the helm of Republic on the Move (LREM) six months after Macron won the presidency in a sensational upset for French politics.

Macron's handpicked favourite, Castaner is a former Socialist MP who joined the 39-year-old's centrist, pro-European campaign early in his run for presidency.

Castaner, 51, was elected unopposed via a show of hands at LREM's party congress in the eastern city of Lyon, to the irritation of some grassroots members of what Macron called a “citizens' movement”.

The new party chief — who admitted he had not been “dreaming” of the unpaid job — struck a humble tone as he accepted a three-year term, telling party members: “Your vote gives me no rights, only responsibilities.”

After widespread grumbling in private, a small group of 100 followers went public this week with an open resignation letter that claimed the party had no internal democracy and was consumed by political scheming.

The anonymous rebels said in the letter that LREM was guilty of “contempt and arrogance”.

The complaints are one of a number of challenges faced by Macron, who needs a support base as he battles opponents including trade unionists opposed to his labour reforms and leftists who accuse him of favouring the rich with his tax policies.

Even senior figures admit that, since tasting glory over the summer with a membership that swelled to more than 350,000, the party has stagnated.

Some party activists criticised the decision to use a show of hands to elect Castaner, arguing it would pressure voters into toeing the line.

LREM will be vital for Macron at the local and regional level in France, where future elections for mayors and councils offer him the chance to push his pro-business agenda to “transform” France.

Launched simply as En Marche (On the Move) in April 2016, it was a hugely effective electoral force with its thousands of volunteers who knocked on doors, flocked to rallies and distributed leaflets.

Many were drawn to Macron's promise to do politics differently, with local committees invited to brainstorm and contribute to the party's manifesto.

Macron's rise to the presidency — and subsequent parliamentary elections in June in which En Marche won a hefty majority — marked a break in decades dominated by the traditional left and right.

Both the mainstream Socialists and rightwing Republicans are currently leaderless.

Speaking anonymously, one government minister said Castaner was what LREM needed to get through its growing pains, as someone who is both close to Macron and on good terms with ordinary party faithful.

“The movement has not completely matured,” the minister said.

“We need to let the leaders emerge — those who are already in the government and parliament — and the best person to get them to emerge is Castaner.”

Castaner's appointment will prompt a mini re-shuffle early next week as he will have to step down as government spokesman.