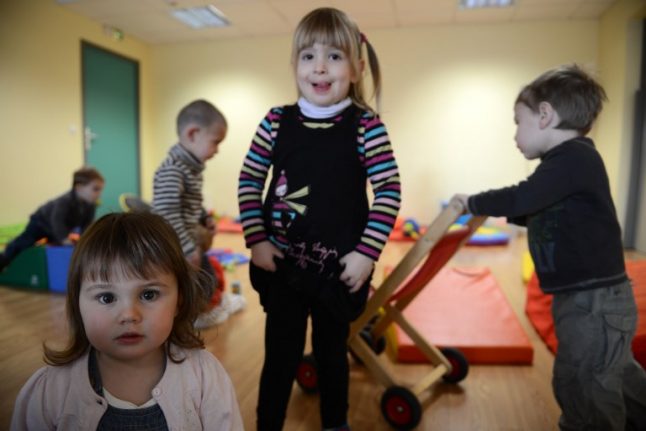 Photo: AFP
French NGO the Robin Hood association published the worrying information after the problem was exposed as part of an investigation carried out by the Bureau of Geological and Mining Research.
Out of the 40 creches investigated in Paris it was found that 30 posed a potential health risk with evidence of lead, mercury, benzene and trichlorethylene pollution, reported Le Monde.
Of the 30, 21 of the creches were classified as category B meaning that the situation should be monitored.
More worryingly, nine of them were placed in category C signifying that action should be taken.
“The presence of pollution requires the implementation of technical management measures, or even sanitary measures,” said the report.
The results of the study, which was conducted off the back of a national campaign launched in 2013, have until now remained confidential.
But the Robin Hood association felt it was information the public and parents had a right to know.
“Before being a residential city, Paris has long been an industrial city,” said Jacky Bonnemains, spokesperson for the association.
“The factories closed in the 1930s or the 1980s at a time when environmental protection was more rudimentary than today. Basements and groundwater could be permanently contaminated by their activity, leaving the buildings that succeeded them at risk of contamination,” he said.
“The results of the investigation were never really communicated. We wanted to get them out there so that parents would be informed,” Bonnemains added.
What risk does it pose?
Opinion is divided over how dangerous the risks are for young children.
“Pollutants have impacts on the development of the brain, the nervous system and the skeleton and can have delayed effects on reproductive capacity,” said the guide published by the association.
However Paris City Council has said “the expertise conducted with the Regional Health Agency have shown that there is no danger to the health of children or staff.”
“There is no danger for children, you have to understand that if there was the slightest danger, we would have taken precautions”, said Sandrine Charnoz from Paris City Hall in an interview with BFMTV.
READ ALSO: