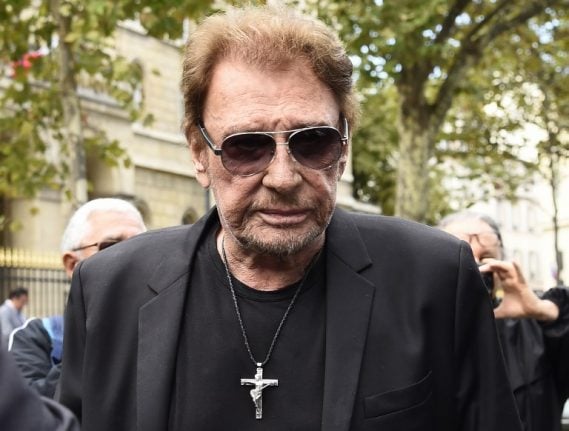 Photo: AFP
Celebrity magazine Voici had reported that France's answer to Elvis Presley checked into a private hospital in western Paris early Monday morning.
“He is expected to go home shortly, the situation has been stabilised,” a source close to the 74-year-old singer told AFP.
A musical icon known simply as “Johnny” at home, Hallyday has sold more than 100 million records in his decades-long career.
He announced in March that he was being treated for cancer but said his life was not in danger.
READ ALSO: Hallyday's manager Sebastien Farran sought to reassure fans earlier this month, saying: “He's fighting this, and he'll be out to show you that soon.”
He expressed hope that Hallyday would return to the stage — he has already announced a tour for 2019 — adding that the crooner was finishing a new album.
The star's early concerts in the 1960s prompted scenes of hysteria similar to those seen at shows by the Beatles and the Rolling Stones as the rock 'n' roll revolution swept the Western world.
Hallyday is also known for an eventful private life and a row over his decision to dodge French taxes by taking up residence in Switzerland.
His major hits, almost always sung in French, include local versions of Presley's “Hound Dog”, “Let's Twist Again” by Chubby Checker and “Bebop a Lula” by Gene Vincent.