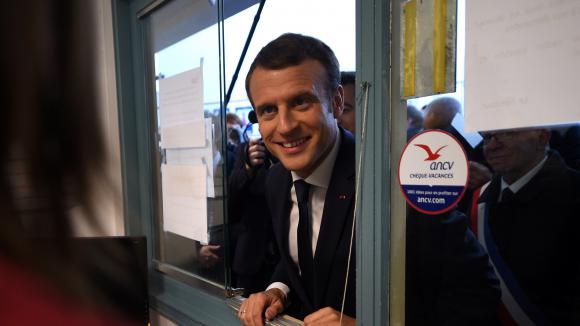 Better policing, extra help for single mothers and incentives for companies to recruit from poor districts are among Macron's plans for tackling stubborn deprivation away from the bright lights in the centre of big cities.

“I want the face of our neighbourhoods to have changed by the end of my term,” the French leader said, expressing regret that gritty suburbs had become synonymous with crime and violence.

The major speech in one of France's poorest towns — Tourcoing, on the Belgian border — comes as the former investment banker has faced repeated criticism for seeming out of touch.

He acknowledged that France's industrial belt — where voters backed his far-right rival Marine Le Pen in droves at this year's presidential election — had been hard hit by globalisation.

Jobs, opportunities and safe surroundings should not be “reserved for the luckiest,” the 39-year-old centrist said.

And he said government failures were partly to blame for Islamic radicalisation in depressed immigrant suburbs which has resulted in hundreds of young men setting off to join jihadists in Syria and Iraq.

“In these neighbourhoods we have closed schools, cut aid for the oldest and youngest, and other groups have arrived touting solutions for all of that,” he said, pointing to ultra-conservative Muslim associations.

“I cannot ask a young person to believe in the republic when the republic isn't up to it,” he added, promising more than a dozen anti-radicalisationschemes by the start of 2018. Set out at a carefully chosen location — a former industrial centre renovated as a hub for tech firms — Macron's plans include tax benefits for companies hiring workers from deprived neighbourhoods.

The pilot scheme will from January exempt companies hiring people from target areas — including Marseille and the Paris suburbs — from thousands of euros of payroll taxes per employee.

Poor neighbourhoods will also be first in line for the 10,000 new police Macron has vowed to hire, as well as investment in transport links and trial schemes to combat discrimination.

The speech followed a similar trip Monday to Clichy-sous-Bois — the north Paris suburb where nationwide riots first flared in 2005 — with Macron facing scepticism from the left over his commitment to helping the working class.

“How you can you give a speech on urban policy when you're hitting social housing and subsidised jobs?” said Martine Aubry, the Socialist mayor of Lille which counts Tourcoing as a suburb.

Macron has come under fire from critics labelling him a “president of the rich” for slashing wealth taxes while cutting housing benefits and axing thousands of job contracts subsidised by the government.

A series of offhand comments — dismissing critics of his business-friendly labour reforms as “slackers”, for instance — have also landed him in hot water.

“I don't know what that means, 'having a policy for the rich',” he hit back Tuesday. “All I know is that when there is not an economy that moves everyone forward, neighbourhoods in difficulty do not do well.”

Macron's ratings have plummeted since he stormed to power in May at the head of new centrist party En Marche (On The Move).

Some 40 percent had a positive opinion of him in October, according to a survey published by the Liberation newspaper Monday, down 13 points from June.

Two thirds consider themselves to be losers from his policies, according to the poll.

Two major trade unions, the CGT and FO, have called demonstrations Thursdayagainst his reforms, which include an overhaul of France's famously complicated labour code.