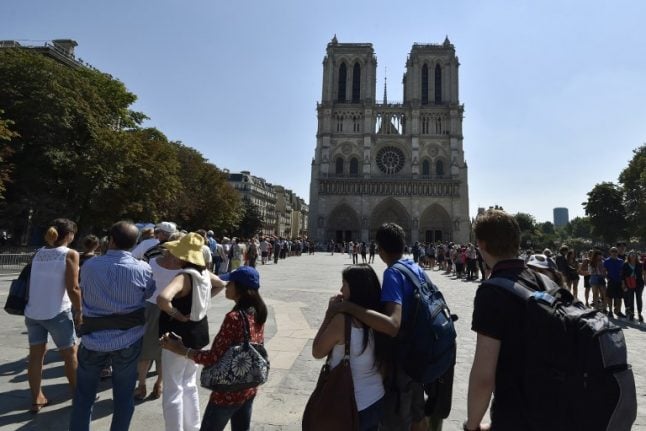 TV presenter Stéphane Bern, recently tasked by the president to save France's crumbling cultural heritage, kicked off the row by suggesting visitors to France's many cathedrals should have to pay an entry fee.

“There is an urgent need to charge the entry of cathedrals,” he told Le Parisien. “We are the only country where access to them is free. In London, entrance to Westminster Abbey is set at €24.”

After being hit with a backlash of angry remarks by politicians on Twitter Bern later qualified his remarks by stating he only meant that tourists visiting Notre-Dame cathedral in Paris should have to pay.

“I was only suggesting charging tourist visitors an entrance fee to Notre-Dame, because they prevent worshippers from gathering there,” said Bern on Twitter. The TV presenter was responding specifically to French senator Nathalie Goulet who stated to him that charging people to enter cathedrals would be illegal as it would act as a tax on a place of worship and therefore breach France's 1905 laws on a separation of church and state.

The senator also suggested it would breach equality laws because entrance to synagogues, mosques and temples would remain free.

But Bern believes charging tourists to visit Notre-Dame would hardly be a scandal given visitors have to pay to visit cathedrals such as Saint Peter's Basilica in Rome. “Foreigners find it normal,” he said. Bern noted that certain tour operators in France charge their clients for trips to visit cathedrals like Notre-Dame and Sacré-Coeur even though entry is free.

There's no doubt Notre-Dame Cathedral in Paris could do with some financial aid.

The cathedral is 854-years-old and attracts around 13 million visitors each year, but it is in desperate need of repairs.

Vital repair work needs to be carried out to fix, among other things, a toppling gargoyle, cracks on the facade and the support structure for the church's famed stained glass windows.

In June The Local reported how the foundation charged with looking after the upkeep on the Cathedral launched an appeal for donations to wealthy Americans to help save its crumbling features.

Senior Advisor Fundraising for Friends of Notre-Dame, Michel Picaud told The Local that turning to Americans for financial help was an obvious move given the amount of interest in the cathedral from across the pond.
“It was put it to us that Notre-Dame is a world monument and we could look to raise money for its repair from outside of France,” Picaud said.
“We receive many requests from Americans wanting to know if there is a channel they can use to donate,” he said. “The cathedral is a big part of Paris' history but also a big part of American history in the city.”
The French government coughs up €2 million each year for Notre-Dames upkeep but those in charge of spending it say it simply isn't enough.
Perhaps charging an entry fee is the correct solution.
But would visitors be willing to pay it?
Url copied to clipboard!