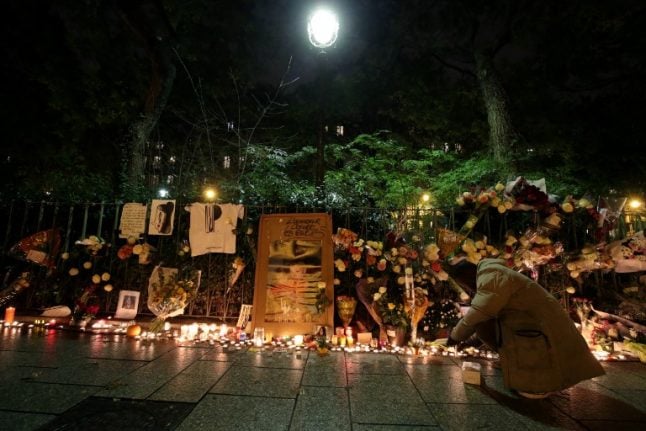 File photo from November 13, 2016 shows a man lighting a candle at a makeshift memorial near the Bataclan concert hall in Paris as France marked the first anniversary of the Paris attacks. Photo: JOEL
Among the 10 jihadists who wreaked havoc on the French capital on November 13, 2015, the only survivor is Salah Abdeslam, who is refusing to talk to investigators.
The probe into the Paris bloodbath, which was planned in Belgium, overlaps considerably with an investigation into attacks on the Brussels airport and metro four months later that claimed 32 lives.
Key witness silent
Abdeslam's capture in Belgium and transfer to France in April 2016 has not been the boon investigators had hoped for, since the 28-year-old petty criminal-turned-jihadist has refused to cooperate with the investigation.
Against all expectations however, he has said he wants to appear at a trial in Brussels to face charges of attempted murder of police officers during his arrest in the Belgian capital, but there too he may refuse to answer questions.
Most members of the jihadist cell responsible for both the Paris and the Brussels attacks have been killed or arrested.
Requests have gone out across Europe as well as to Turkey and north Africa in an effort to piece together the network that enabled the conspirators to infiltrate the flow of migrants into Europe in the summer of 2015 and plan attacks ordered by the Islamic State group in Syria and Iraq.
Fifteen suspects have been charged or are being sought with arrest warrants.
READ ALSO: Belgium-France nexus
Six people besides Abdeslam are in custody in France including two men suspected of having been selected to take part in attacks: Adel Haddadi, an Algerian, and Muhammed Usman of Pakistan.
The two men, who travelled from Syria along with two of the jihadists who attacked the national stadium on the outskirts of Paris, were arrested in Austria a month after the carnage.
Three associates of Abdeslam accused of helping him flee to Belgium the day after the Paris attacks and a man accused of providing fake IDs to the jihadists are also being held in France.
Five suspects are in custody in Belgium who are also wanted for trial in France. One of them, Mohamed Abrini, dubbed “the man in the hat” from CCTV video at the Brussels airport, was transferred briefly to France in January to be charged.
Jawad Bendaoud, who lodged Paris attacks ringleader Abdelhamid Abbaoud, will be tried along with two other defendants in a regular criminal court instead of France's special terror court early next year.
A suspected logistician for the November 13 attacks, Mohamed Bakkali, was arrested in Belgium and is wanted in France. He was charged Tuesday in Brussels over an August 2015 attack on a Paris-bound Thalys train that left two passengers injured.
France is also seeking the extradition of another suspected logistician, Ahmed Dahmani, a Belgian of Moroccan origin who was arrested in Turkey just after the Paris attacks and thought to be headed to Syria.
Ringleader at large
A suspected kingpin of the network, Oussama Atar, has been identified from a photograph by one of the men arrested in Austria as the mastermind of the Paris attacks, operating from Raqa, the former Syrian “capital” of Isis.
The 32-year-old Belgian and Moroccan national, who is at large, is a relative of the El Bakroui brothers who blew themselves up in the Brussels attacks and the brother of Yassine Atar, who is being held in Belgium and also wanted in France.
Conversations found on a computer revealed the “central role” that Atar played in planning attacks in Europe, according to Belgian investigators.
Also on the run is Ahmad Alkhad — thought to be an alias — suspected of making the bombs and suicide belts used in the Paris and Brussels attacks. His DNA was found on a suicide vest worn by one of the assailants who blew themselves up outside the Paris stadium.
The fall of Isis strongholds in Syria and Iraq has kindled investigators' hopes of ensnaring some of the ringleaders of the Paris and Brussels attacks, if they are still alive.
By AFP's Benjamin Legrende