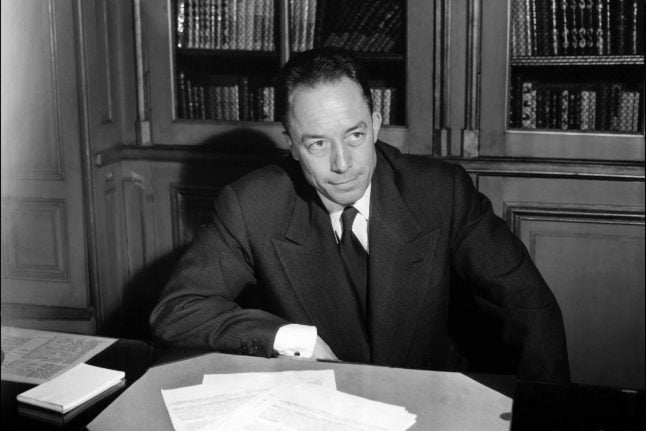 She was a remarkable and independent-minded actress; he was the most admired writer of his generation, a member of the French Resistance who was living a double life in more ways than one.

More than 860 letters burning with desire from their 13-year affair conducted while Camus was married to the beautiful pianist and mathematician Francine Faure, have been brought together by his daughter.

“Their letters make the world a bigger, brighter place, the air is lighter simply because they exist,” Catherine Camus wrote in the introduction to the vast 1,300-page volume, put together for his publishers, Gallimard, who played a key role in his life and tragic early death.

Casares and Camus met on June 6, 1944, the day Allied troops landed on the Normandy beaches to begin the liberation of France.

She was 21, he 30 when they first kissed after a rehearsal for his play “The Misunderstanding”. Paris was still under Nazi occupation, and Camus, the editor of the underground newspaper Combat, was playing a deadly game of cat and mouse with the Gestapo.

But their intense affair did not survive his wife's arrival in newly liberated Paris that September. Casares gave Camus an ultimatum.

Although Camus did not believe in marriage, the Algerian-born writer chose to return to the marital bed.

Despite the birth of twins, Jean and Catherine, less than a year later, his infidelity soon drove Francine to distraction and depression.

'Without you I want to die'

The writer was more preoccupied, however, with his own broken heart. “Everywhere I turn I see the night,” Camus wrote pleadingly to Casares after their split. “Without you I have lost my strength. I want to die.”

Four years to the day after they first met, their paths crossed on Boulevard Saint-Germain in Paris — and their passion took flight again.

READ ALSO: Letter from Camus to Sartre found in France

They exchanged letters almost daily from then on. Sometimes they talked of their work and their friends — “Simone Signoret had an abortion… (Yves) Montand is very down,” wrote Casares in 1951.

But mostly they wrote of love, and how they longed to consumate it.

Camus called her his “little seagull”, “my black trout”, “my tasty one”.

“I'm pacing the floor. I keep imagining the moment we close your bedroom door,” he told her.

“I am boiling inside and out. Everything is burning, my soul, body, outside, inside, heart, flesh… Do you understand? Do you really understand,” she told him.

“The correspondence, uninterrupted for 12 years, shows how irresistible their love was,” according to Catherine Camus, and how “crazily busy” Casares was both on stage and screen in such masterpieces as “Les Enfants du Paradis” (1945).

She had fled her native Spain in 1936 with her father, who was prime minister when Francisco Franco began his military revolt against the elected republican government.

They worked together again on Camus's play “The Just Assassins” in 1949, but they were often apart.

She was on a triumphant theatre tour of Argentina in 1957 when he won the Nobel Prize for literature. He immediately send her a telegram, “Never have I missed you more. Your Alonso.”

“Last letter,” Camus wrote prophetically, although he may have been referring to the final letter of the year, or the last one before they saw each other again.

He told her that he would be returning to Paris from his family home in Lourmarin in Provence “by road” on January 4, although he had also bought a train ticket.

“See you soon, my superb. I am so happy at the idea of seeing you again that I laugh just writing it… I kiss you and I hold you to me until Tuesday when we will start again.”

Casares passed away aged 74 in 1996, having married her friend, the gypsy singer Andre Schlesser, who comforted her after Camus's death.