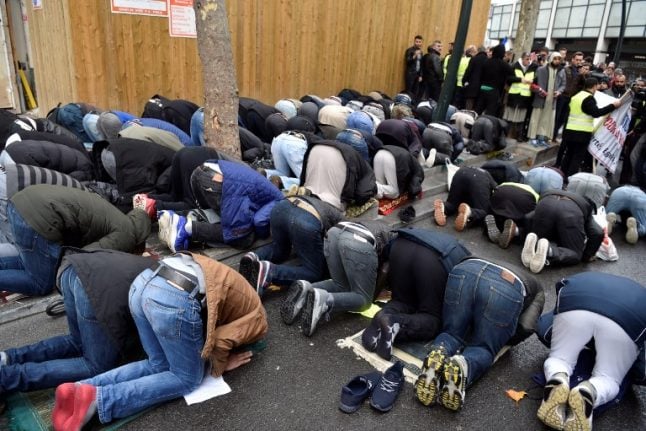 The stand off which was caught in several video clips (see below) took place in the Paris suburb of Clichy on Friday afternoon.

The local right wing mayor Remi Muzeau led the march after growing infuriated by the presence of hundreds of Muslim worshippers praying on the town's market square every Friday for the past nine months.

Images relayed from the scene near Clichy Town Hall shows around 60 elected officials, including MPs and the president of the greater Paris region of Île-de-France, Valerie Pecresse marching with their tricolore sashes as they sing the Marseillaise.

They head towards around 200 Muslim worshippers who are observing their Friday prayer outside in protest against the town's decision to close a prayer hall.

A line of riot police separate the two groups and at one one point tensions appear ready to boil over. Théo Maneval a reporter for the Europe1 radio news site described the scenes as “bizarre” and “surreal” as the elected officials appeared to try and physically displace those praying by marching right through them.

“It's getting even more surreal, as the elected officials with their sashes try to jostle the people praying. Movement of crowd, jostling, people falling … The police intervene,” Maneval tweeted.

Mayor Muzeau was happy with the protest: “We did what the police should have done a long time ago.”

Authorities opened a new mosque for the community, but it was 1.5km away and worshippers said it was hard to reach. Their Friday protests have been aimed at pressuring the local council to agree to open a prayer hall in the centre of Clichy.

But those protests have infuriated local officials, who have called on the government to intervene, pointing out that praying in the street is illegal in France.

“The public space cannot be taken over illegally,” said President of Île-de-France Valerie Pecresse. “We are in a country where we do not pray in the street, the rules of law are being flouted.”

France's far right leader Marine Le Pen, who has long spoken out against Muslims praying in the street was quick to seize on the incident.

“The Republic must go on the offensive in the face of Islamist provocations,” Le Pen tweeted.

“What is the Minister of the Interior waiting for to restore public order and secularism? Laxity is not an option.”

Rows over Muslims praying in public flare up regularly in strictly secular France. Worshippers have taken to the streets to pray in recent years often in protest over the shortage of mosques.

In 2015 there were calls by some in the Muslim community to turn some of the country's many empty churches into mosques, which drew much opposition on the right.

And in 2010, prayers in the street became a national issue when Marine Le Pen provoked outrage by comparing street prayers to the Second World War, likening them to an “occupation.” She was charged with inciting hatred but acquitted in 2015.