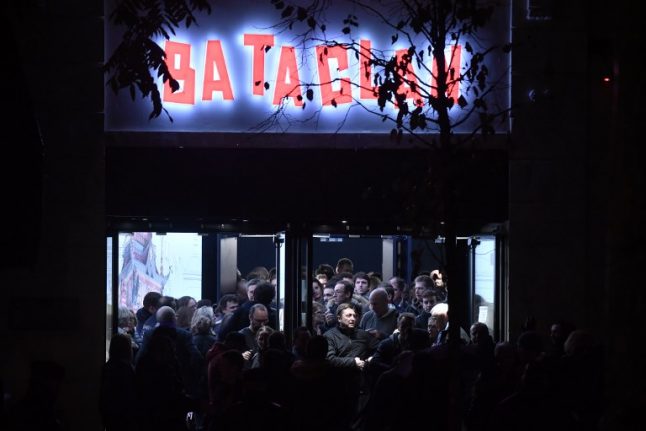 Even after reopening with an emotional concert by the British rock star Sting on the eve of the first anniversary of the November 13, 2015 attacks on the French capital, some bands were still reluctant to perform there again.

“The months after the reopening were quite difficult in terms of putting a programme together,” the venue's co-director Jules Frutos told AFP. “But
little by little it has come together.”

Frutos said he has been hugely encouraged at how music fans have returned in force, with the 1,700-capacity venue 90 percent full on average over the year.

However, French musicians in particular remain hugely divided over the venue.

While singers Saez and Vianney quickly volunteered to play the Bataclan to show their defiance of terror, others like Francis Cabrel said could not bring themselves to return.

Nicola Sirkis, the lead singer of Indochine, was even more vehement, declaring last month that he thought it was “ignoble to reopen” the venue which should have “remained a sanctuary… a memorial to the dead”. Venue not a 'mausoleum'

“The families of the victims have been incredibly dignified,” he said.

“What happened was of an extreme violence. That the city of Paris has not build a monument to their memory is a shame… I will never return to the
Bataclan nor play there again,” he said.

“What happened there was too serious, unforgettable and unforgivable.”

But a defiant Frutos hit back, “I can't understand how an artist can say that. How can he say that a concert hall become a mausoleum?”

The impressario has also crossed swords with Eagles of Death Metal, the US band who on stage on the night of the massacre, turning lead singer Jesse
Hughes away from the reopening for suggesting that the Bataclan's security guards were in on the attack.

“There are things you can't forgive,” Frutos told AFP at the time, pointing out that staff had saved lives during the bloodbath.

“For us the most important thing is the public,” Frutos added. “It was they who were targeted, not Eagles of Death Metal.” (A plaque bearing the names of the victims of the Bataclan attack was unveiled on the first anniversary of the mass shooting. AFP)

Rock 'n' roll spirit is back

“What we feared was that people would have a blockage” about returning to the Bataclan. “We wanted to see how people would behave, if they would be comfortable again” in the reopened venue, given what had happened.

“Now we no longer have that fear, even if what happened in Manchester (with the bombing of an Ariana Grande concert in which 22 people died) brings it all back to us,” Frutos added.

The Bataclan has been under close police protection since its reopening, but Frutos said the management had “worked with the authorities to make sure that security was much less visible” than it was in the weeks after the doors reopening, when streets were around the concert hall were blocked.

Around 50 bands have already been booked for the first three months of 2018, and “the next year looks promising”, he said. “Now we are trying to get our heads around normal everyday problems of running a venue, which is actually quite soothing,” he joked.

For Frutos, the moment when he realised the spirit of rock 'n' roll was alive and kicking again in the Bataclan came during the concert by the renegade British rocker Pete Doherty (see photo above) five days after Sting's.

“But it had nothing to do with what was happening on stage,” Frutos laughed. “I went into the toilets and saw the toilet bowls had been smashed and I thought, 'That's good. Everything is back to normal.'

“I burst out laughing standing there on my own. When you have damage like that you know the place is alive again.”