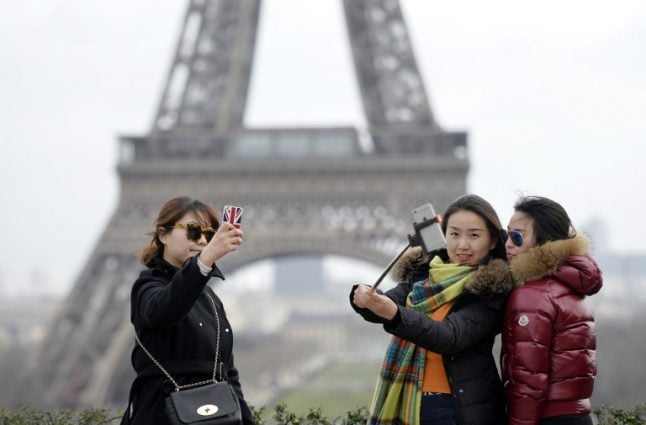 Photo: AFP
Leon Chen looks frazzled as he shepherds a group of Chinese tourists through the Galeries Lafayette department store in Paris,
past stands stacked with luxury bags, perfume, jewellery and caviar.
As a guide, he knows all too well that cash-flush visitors lugging bags of valuables are easy prey for muggers and pickpockets.
“It's happened many times. The last two groups I had were robbed in this store,” he said, recounting how unseen predators made off with bags momentarily left on the floor by their owners.
“I tell them Paris is dangerous and to hide their money inside their clothes. I try to be more careful everywhere. What more can I do?” he asked.
While all tourists are potential prey for thieves, the big-spending Chinese, who have a reputation for carrying wads of cash with them, have emerged as a prime target.
READ ALSO: Last week, a group of around 40 Chinese tourists were gassed and robbed outside their hotel near the capital's Orly Airport — the latest in a series of attacks that have dented France's image among Asian travellers.
In a statement on Saturday the Chinese embassy in France noted “several large-scale violent robberies” involving Chinese tourists recently in the country and urged them to exercise caution.
Jean-Francois Zhou, head of the Paris-based Ansel travel agency, said France used to be associated with “the good life and gallantry”.
“That image has been tarnished. Everyone now is aware of the security risks,” he added.

“The Chinese feel really abandoned in France,” he said.

Robbers posing as cops
The most recent robbery, in the low-income suburb of Fresnes, fits a pattern of attacks at cheaper hotels in outlying neighbourhoods where some tour operators put up less affluent visitors.
In August 2016, a group of assailants also used teargas to hold up a group of tourists outside their hotel in a gritty neighbourhood near Charles de Gaulle airport to the north of the city.
A receptionist at a three-star hotel in the high-rise northeastern suburb of Le Blanc-Mesnil told AFP that her place of work — which also regularly receives Chinese groups — had been targeted repeatedly.
“They used to come in groups of five or six, on scooters, and rob handbags and cash from tourists in the parking lot,” she said, asking to remain anonymous because she was not allowed to speak to the media. Photo: AFP
The hotel responded by closing off an entrance close to the road that served as a quick getaway route and instructing staff to call for a police car to be present each time a Chinese group arrives.
“But it's still happening today,” the receptionist said, adding that the hotel had been targeted twice in the past six months by robbers posing as police officers.
The hotel's management did not respond to a request for comment.
Still 'romantic'
China was the world's biggest outbound tourism market in 2016 in spending terms, ahead of the United States.
Paris is the favourite European destination of the Chinese but France lost some of its lustre in 2015 and 2016, with three large-scale terror attacks dealing a severe blow to its carefree image.
Chinese arrivals fell 23 percent in 2016 to 1.8 million, but tour operators and department stores said that by the summer of 2017 they were back in force, encouraged by the marked decline of bloodshed in the past year.
Jenny, a Chinese saleswoman at Galeries Lafayette, which this year opened a store dedicated to Chinese shoppers, told AFP demand for 2,000 euro ($2,300) Italian handbags was brisk.
“Paris is… very romantic!” a young woman in Chen's tour group said in halting English.
But while tourists may have begun taking the continuing terror threat in their stride, crime could yet stymie France's ambition to attract five million Asian tourists annually by 2020.
The police have tightened security around tour groups and deployed mobile vans to help visitors report thefts in a host of languages, including Chinese.
And to encourage visitors to carry less cash, some department stores have begun installing terminals from Alipay and WeChat Pay, two of China's most popular mobile payment platforms.
But for Zhou, “given the scale of the phenomenon, these measures are not enough”.
by AFP's Clare Byrne