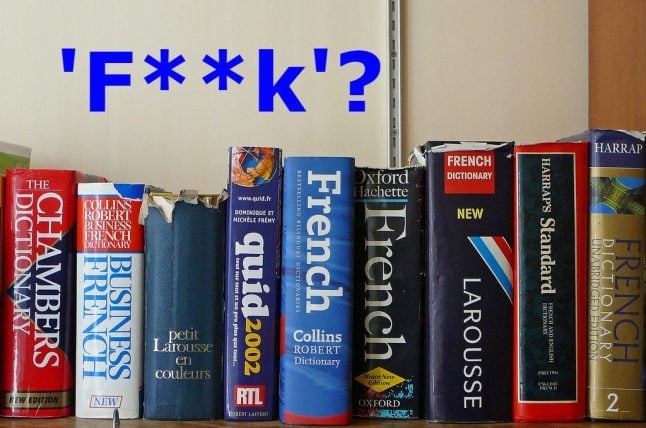 It may be still be too blue for English speakers, but authorities in Canada have ruled that the F-word is no longer taboo on French language broadcasts as its use is so commonplace.

The Canadian Broadcasting Standards Council (CBSC) had previously classified the word as being suitable only for adults in both French and English, banning its use on radio and television to beyond the evening watershed and even then, only with a warning.

But after complaints from listeners that the French-language Montreal radio station CKOI-FM had twice aired clips with the word this year, it changed its mind in a ruling released Wednesday.

The CBSC agreed with the station's argument that the F-word was now “part of the common French spoken language” and therefore does not have “the same vulgar connotations when used in French.”

France's notorious language police at the Academie Française might have something to say about that however. They never take kindly to the creeping invasion of English into the French language.

READ ALSO: Why do the French love a good 'f**k' (when they talk) “The (CBSC) panel emphasizes, in this regard, that language is evolutionary and reflects current society,” it said in its decision.

In the first clip, the singer Madonna could be heard swearing during a women's march against US President Donald Trump. In the second, Green Day lead singer Billie Joe Armstrong could be heard saying it in a concert excerpt.

Anyone who has spent time with French people, particularly younger ones will have realized just how popular the F-word is among them.

And in a sign of how banal it seems in French, it has even been used in newspaper headlines (see below) and in the title of TV shows in France. One of the reasons why the French seem to use the word so much is that they just don't get the weight of “fuck” in English. There's no real translation that gets the same force of the word – putain or merde just don't do it justice.
Hence there can be a few embarrassing situations when the French will blurt out a “fuck” in the wrong company but be completely oblivious to the raised eyebrows around them.
Camille Chevalier-Karfis, founder of FrenchToday.com, said the use of the word has left her scratching her head too.
“I am surprised at the use of the word “fuck” in the French language, especially since it seems to me that the French don't use it right,” she told The Local.
“This morning only, a friend sent me an email about her elderly mother that said: “je ne supporte plus cette fucking mother méthode” (I can no longer stand this despicable method my mother uses). Why did she write this part in English? Probably to show her anger, because it sounded good to her this way.”
“I would never associate the word “fuck” with my own 76-year-old mother. It just sounds wrong. But the French don't have enough of a feeling for the word, or rather they have the wrong feeling for it.”
Perhaps the nonchalance towards swearing in English can perhaps be explained by the fact that the French adore swearing in general and they use one word in particular: putain (see below).
You will lose count of the amount of times you'll hear “putain” (whore) in a conversation with French people, which despite being one of the most common swear words, is still considered by many to be coarse.
The French are just a bit more liberal with cursing than the Brits or the Americans, similarly to how they're more liberal with their sex and nudity on TV.
READ ALSO: An ode to the greatest French swear word